With its 142-year rich history, Toshiba has a leading display technology in Japan with the brand ranked highly international global technology brand list’s. 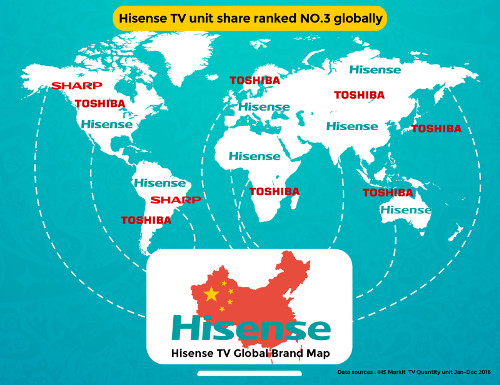 Hisense will purchase 95% stock shares of Toshiba Visual Solutions Corporation (“TVS”), a wholly owned subsidiary of Toshiba Corporation for 12.9 billion Japanese Yen with Toshiba retaining 5% stock holding. Hisense will obtain the TVS businesses including production, research and development, and sales functions as well as license to use the Toshiba brand for a period of 40 years for visual solution partners operating in Europe, South East Asia and other markets.

TVS primarily operates in TV and variety of ancillary products, including commercial and advertisement display products. The TVS purchase also secures two factories in Japan and hundreds of talented Toshiba R&D employees as well as a significant IP portfolio relating to TV technology business patents for image quality and acoustics.

Mr. Liu Hongxin, the CEO of Hisense Group, said that Hisense would optimize TVS’s resources on R&D, supply chain or global sales channels, cooperate with and support each other in display technology, provide competitive content operation services for smart TVs for the global market and accomplish fast growth in Japanese market.

According to the IHS, sales of Toshiba TV ranked No.3 in Japanese market in 2016 with the Hisense TV market share in Japan the highest among all non-Japanese brands. Collectively both brands’ cumulative market share reaches over 20% after the transaction. Hisense’s TV business in 2016 ranked third in the world (IHS) and has held NO.1 market share in China for 13 consecutive years.

As the Official Television Sponsor of the FIFA World Cup Russia 2018, Hisense is poised to continue to expand and implement its global brand vision and strategy. With the benefit of this acquisition, Hisense will develop and enlarge its international strategy of TV business in R&D, branding and marketing by operating under multiple brands. The cooperation between Hisense and Toshiba will drive changes to the new picture of TV business.