China’s TV programming industry now second only to the US

China’s TV Programming Market is Now Second Only to the US, IHS Markit Says

China has overtaken the United Kingdom in the television programming industry, becoming the second-largest market in the world after the United States, according to IHS Markit (Nasdaq: INFO), a world leader in critical information, analytics and solutions. TV programming expenditures in China, including online platforms, hit 73 billion yuan (US$10.9 billion) in 2017, followed by the UK at (US$10.0 billion), while the US led the global market, spending (US$58.3 billion). 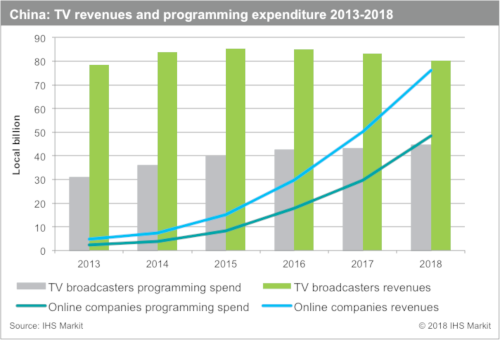 Broadcaster advertising revenue growth in China has plateaued since 2014, reaching 83 billion yuan (US$12.3 billion) in 2017, but online revenue is on the rise, driven by greater video advertising and subscription income. TV broadcasters spent 43 billion yuan (US$6.4 billion) on programming in 2017, compared to 30 billion yuan ($4.5 billion) spent by online platform companies. “As digital entertainment viewership gains traction, advertisers are gradually moving more of their budgets to digital platforms,” Teoh said. “We expect online companies to overtake TV broadcaster spending in 2018, if the content creation spree persists.”

Original programming made up 49 percent of all Chinese programming in 2017, followed by acquired programming at 46 percent, and sports programming at 5 percent. IHS Markit expects this split to remain relatively consistent over the next five years. “Broadcasters and online platform companies are increasingly creating their own content, not only to lure paying subscribers, but also for merchandising, mobile game development and other new revenue streams,” Teoh said. “In addition, distribution of linear TV and online platform content can generate lucrative returns, in both domestic and foreign markets.”

Despite the increased focus on original programming in China, acquired content will remain an integral part of broadcasters’ content strategy, as many companies still rely heavily on acquired content. The large and growing consumer appetite for global sporting events, particularly online, is also expected to boost spending on sports programming.

“While online platform companies are increasing China’s TV programming expenditure, they should be concerned by user retention and sustainability of content costs,” Teoh said. “In order to retain existing subscribers and attract new ones, online platform companies are investing heavily to create and acquire exclusive content. Unlike Netflix, these companies still rely substantially on advertising and sponsorship. If the cost of content continues to surge, such aggressive investment will become unsustainable.”