MILTON KEYNES, England — According to a recent report from Strategy Analytics, worldwide sales of smart TVs reached 157 million units in 2018, representing 67% of all TVs sold during the year. The latest research found that more than one than one in five Smart TVs sold today run on the Samsung developed Tizen platform while one in ten run on the Google managed Android TV system. Roku TV captured 4% of global TV sales in 2018 but its stronghold is in North America where nearly one in every four smart TVs sold last year was powered by Roku. Customized versions of the Android OS (AOSP) that do not combine access to Google’s Play Store are used by many Chinese TV makers for their domestic smart TV offering and account for a significant share of non-proprietary smart TV operating systems. 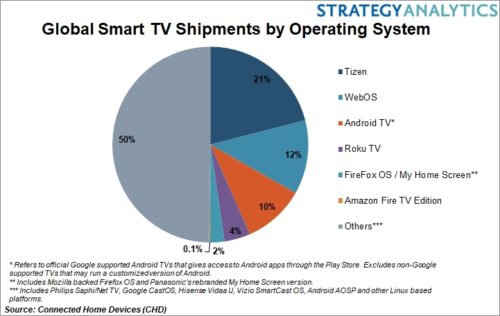 David Watkins, Director at Strategy Analytics and the report’s author commented, “Despite the wafer thin hardware margins on offer, the TV display remains a strategic priority for many technology companies due to the size of the audience that it continues to draw and with that the opportunity to sell advertising space on Smart TV user interfaces and generate new revenues via over the top content services. Control over the Smart TV operating system is therefore of critical importance as it is through this software layer that companies can extract the valuable user data that drives targeted ad revenues. It is for this reason that Google, Roku and Amazon are battling to persuade TV makers to build their TV software platforms into their sets rather than go through the expensive and time consuming process of building and maintaining their own operating systems.”

“Smart TVs have come a long way since the early part of the decade. Clunky web browsers have given way to sophisticated streaming platforms and intelligent content recommendation engines.” added David Mercer, Principal Analyst at Strategy Analytics. “Operating system fragmentation has plagued the market over the years but there are signs that the industry is beginning to consolidate around a handful of platforms. Tizen remains the single largest Smart TV OS globally by sales followed by LG’s WebOS. However, Google’s Android TV and Roku TV in North America have made strong gains in recent years by building on their partnerships with second and third tier TV makers. Samsung will therefore be hoping that its recently announced exclusive arrangement with Apple to integrate the iTunes app into its Smart TVs will give it something that these other fast growing platforms cannot match.”