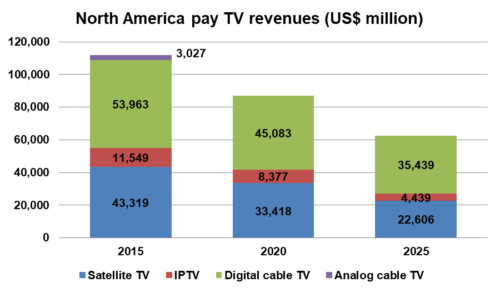 Revenues will drop across the board. Cable revenues will decline by $22 billion – $3 billion less from analog cable and $19 billion lower for digital cable. Satellite TV will fall by $21 billion and IPTV will drop by $7 billion.

Murray continued: “Subscribers are turning against high traditional pay TV fees by seeking cheaper alternatives. OTT allows viewers to see what they want when they want – they are not tied to the channels’ schedules. The value of the linear schedule for recorded programming is rapidly diminishing.”