TV3, the television channel of the Catalan Broadcasting Corporation (CCMA), will conduct the first 5G immersive sport experience next weekend. The 5G tests will be performed during the sixth edition of the MOTUL FIM Superbike World Championship (WorldSBK), which, for the first time, will take place at Circuit de Barcelona-Catalunya from 18 to 20 September.

It represents an initiative of the Catalan government, Circuit de Barcelona-Catalunya and CCMA, in the framework of the Barcelona 5G consortium. It will also involve the collaboration of the Guttmann Institute of Barcelona, the Institute of Industrial Computing (IRI-UPC) and the company Kataclack. In addition, Vodafone will provide 5G service along the track’s main straightaway and in the box area, which is where the tests will be performed. 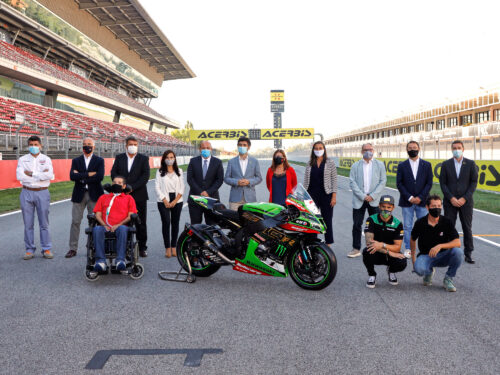 The project consists in sending the race video signal from six cordless television cameras through the 5G network and broadcasting the live signal remotely, from the cloud. The conditions of the superbike speed races will put the features and new possibilities of 5G (image quality, special effects, low latency, etc.) to the test in a real case of televised transmission. Three of the cameras will be state-of-the-art mobile terminals and a fourth PTZ camera will be operated in situ to capture the image and sound of the journalist who does the transmission.

The fifth camera, a GoPro, will be controlled remotely by Armando Folgado, an ex-patient of the Guttmann Institute, slot pilot and expert in the motoring world. Folgado will control this camera with his pupils, live, from the Guttmann Institute itself, equipped to serve as an imaginary fan zone of the track. To do so, he will use special glasses and a screen designed by IRI-UPC. In addition to the five cameras connected via 5G, the signal will be supported by the official WorldSBK signal with the graphics and other resources typical of this type of transmission.

Finally, a sixth 360° camera installed by Kataclack on the track’s main straightaway will allow the viewers to select, from home, the point of view they want through TV3’s YouTube channel. Thus, they’ll get their first taste of an immersive WorldSBK race experience through any connected device, fixed or mobile.

On Saturday and Sunday, CCMA will broadcast the WorldSBK courses through the Esport3 television channel, the website TV3.cat and the TV3 app. It will be a transmission, therefore, like never seen before, with images captured from multiple points to reveal all the emotion of the championship on and off the track, all using 5G technology and a totally innovative realisation.

WorldSBK is shown on over 190 television channels and fills up to 3,000 hours of live television; during the first half of 2020, it has achieved over eight million viewers from audiences around the world. Moreover, its social networks draw over two million followers and in 2019 they accumulated a presence of 700,000 viewers at the thirteen tracks where the races were held.