Asia-Pacific pay TV revenue to fall over next five years

Pay-TV service revenue in Asia-Pacific is set to drop from US$61.6bn in 2020 to US$60.8bn in 2025 due to slowdown in pay-TV household penetration, continued decline in Cable TV subscriptions and fall in average spend per pay-TV account in the region, according to GlobalData, a leading data and analytics company.

An analysis of GlobalData’s Asia-Pacific Pay-TV Forecast Pack reveals that pay-TV subscriptions will slowdown or decline in some of the most advanced markets in the region such as Hong Kong, Singapore, Australia and Vietnam over the forecast period, as users swap their traditional pay-TV subscriptions with over-the-top (OTT) video alternatives. 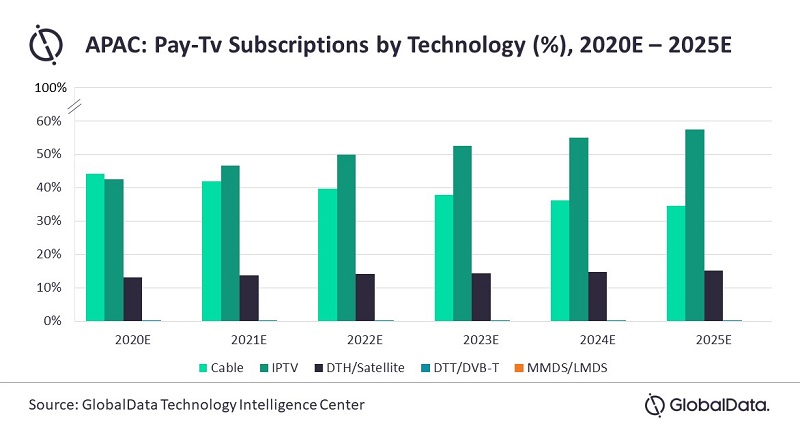 Kantipudi Pradeepthi, Research Analyst of Telecoms Market Data & Intelligence at GlobalData, says: “There has been a rapid deployment of FTTH/B network in countries such as the Phillippines, Thailand, New Zealand and India, which has been a major catalyst for IPTV adoption in the region.”

China leads the IPTV segment in terms of subscriptions and will go on to account for 80.2% of the total pay-TV subscriptions in the region by the end of 2025.

The growing demand for IPTV services will however fail to reverse the declining trend projected for the overall pay-TV service revenues in the region over the forecast period as cord cutting by subscribers and competitive pricing/ discounts offered by operators will continue to cause the average spend per pay-TV account to stagnate or even decline.

Ms Pradeepthi concludes: “OTT-based video streaming platforms have caused massive disruption in the traditional pay-TV services in the region. Introducing OTT offerings as a part of their product bundles or partnering with OTT players can help pay-TV operators retain their customer base and improve their content proposition.”