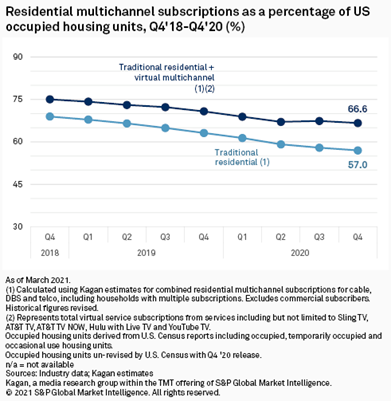 Virtual multichannel services blunted the overall erosion of people taking a package of live linear channels, but the estimated 2.7 million new subscribers for the services that increasingly resemble the traditional services being displaced fell short of offsetting cable, telco and satellite defections.

Losses for those traditional cable, telco and satellite providers slowed in the fourth quarter but the full-year decline underscored that the impacts of the pandemic amplified cord cutting instead of insulating an industry built around home entertainment.

The fourth quarter offered an overall improvement in traditional subscription losses at 1.5 million, but the virtual segment did not maintain the surprising momentum from the third quarter, tallying a tepid estimated gain of 223,000 to finish the year at nearly 12.5 million subscriptions.

S&P Global Market Intelligence’s opinions, quotes, and credit-related and other analyses are statements of opinion as of the date they are expressed and not statements of fact or recommendation to purchase, hold, or sell any securities or to make any investment decisions, and do not address the suitability of any security.