BOSTON — Samsung’s Tizen smart TV streaming platform further extended its lead in 2020 as the number of Tizen devices in use worldwide increased by 21% year-on-year to 162.3 million, according to the latest research from Strategy Analytics’ TV Streaming Platforms service. Strong growth was also seen in Google’s Android TV (+42%), Roku TV OS (+40%) and Amazon’s Fire OS (+35%), while Sony’s PlayStation, Microsoft’s Xbox and Google Cast each saw declines. According to the report, Global TV Streaming Platform and Vendor Market Share, the total number of TV streaming devices in use worldwide increased by 122 million in 2020 compared to a year earlier, reaching 1.28 billion. Tizen retained the number one position overall, with a share of 12.7%, up from 11.6% a year earlier. Tizen was followed by LG’s WebOS (7.3%), Sony PlayStation (6.4%) and Fire OS (6.4%). The report predicts that the number of Tizen devices in use will increase to 184 million by the end of this year, while Google, LG, Roku and Amazon will continue to battle for the other leading positions. 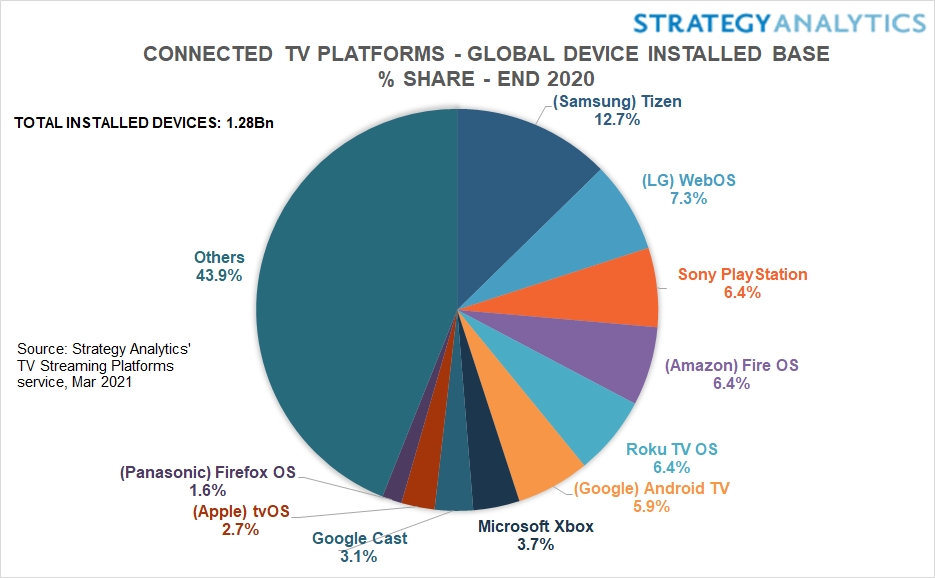 TV streaming platforms like Tizen, WebOS, Fire OS and Roku TV OS are the foundations of the new age of television and video viewing. Samsung’s Tizen platform has grown strongly over the past five years, overtaking more established platforms such as PlayStation, Xbox and Apple’s TV OS. Samsung is now monetising Tizen’s growth by offering the platform’s capabilities to integrate and deliver targeted advertising to TV and video viewers on TV screens. Amazon, Roku and Android TV have also been growing rapidly in recent years and are likely to provide stiff competition to Samsung in the next few years.

There is significant regional variation in platform usage. Roku is the leading platform in the US, where it controls nearly 20% of connected TV devices in use. However Tizen is the leader in 22 of the 25 countries surveyed in the report and WebOS ranks second in 13 markets.

“Samsung’s smart TV market leadership gives it a great foundation to sustain Tizen as the leading TV streaming platform for years to come,” says David Watkins, Director, TV Streaming Platforms. “However several other major players are also growing rapidly and many have the resources to build a serious challenge to Samsung if the strategic ambition is there.”

“The transition to global internet-based television and video services during this decade will be enabled by smart TV systems controlled by a few leading technology vendors,” comments David Mercer, VP and Principal Analyst. “As streaming on TVs becomes the preferred video viewing behaviour, content providers will rely increasingly on the UI, analytics, advertising and content discovery capabilities of connected TV platforms and the firms controlling them. As we are seeing in smartphones today, we envisage strategic conflicts eventually emerging between content and TV streaming platforms which will raise challenging structural and regulatory questions.”