Rakuten TV to roll out 20 channels on Samsung TV Plus

BARCELONA, Spain — Rakuten TV strengthens its ongoing partnership with Samsung Electronics to expand its free content offering on the platform’s AVOD (Advertising-Video-on-Demand) service and launches over 20 of the platform’s own and third-party channels on the Samsung TV Plus service across 16 European markets. 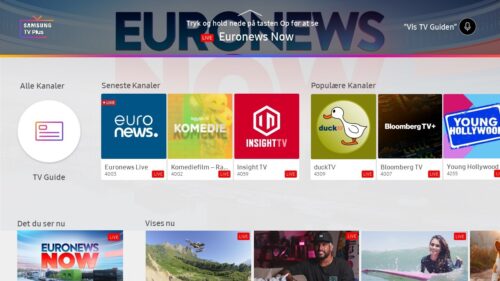 This launch opens new opportunities for advertisers to get in front of audiences across the new regions added to the Samsung TV Plus service, in addition to the possibility of reaching wider audiences through the broadening of channel line-up in territories already live.

During April and May Rakuten TV will roll out a total of 166 new channels in 16 markets through TV Plus.

With 20 premium channels, Rakuten TV will provide the full channel line-up exclusively for TV Plus as it expands its service into new territories. The roll-out started today with the launch of new channels in Denmark, Finland and Norway, followed by Belgium, Luxembourg, Portugal and Ireland planned for May.

Rakuten TV has also landed today at TV Plus in Sweden and the Netherlands with the launch of 7 premium channels.

In addition, alongside Rakuten TV’s line-up already live on TV Plus in the UK, Spain, Germany, France, Italy, Austria and Switzerland, the Family channel became available in these markets on 14 April.

This launch will also broaden opportunities for advertisers, by extending reach to audiences across Europe. Samsung TV Plus sits alongside Rakuten Advertising’s integrated portfolio, where publishers and advertisers can place ad-inventory across a variety of channels with the potential to reach more than 27M users across Europe. Through Rakuten TV channels available on TV Plus, brands will be able to run targeted campaigns to reach their potential new customers leveraging Rakuten Advertising’s powerful set of 1st party data and audience insights.

The enhanced line-up will provide the highest quality content at no cost. From top global channels, such as Africanews, Bloomberg TV, Bloomberg Quicktake, Euronews—the first live channel integrated into Rakuten TV’s AVOD offer—Reuters and VENN, to a wide range of Rakuten TV’s own themed channels curated by genres, from Action, Comedy, Drama, Spotlight, Family and Documentaries.