Pay TV revenue in Japan to expand at a 2.2% CAGR

Despite a decline in the overall pay-TV accounts, pay-TV services revenue in Japan is expected to grow at a compound annual growth rate (CAGR) of 2.2% over the forecast period 2020-2025 supported by increasing aggregate average revenue per user (ARPU), according to GlobalData, a leading data and analytics company. 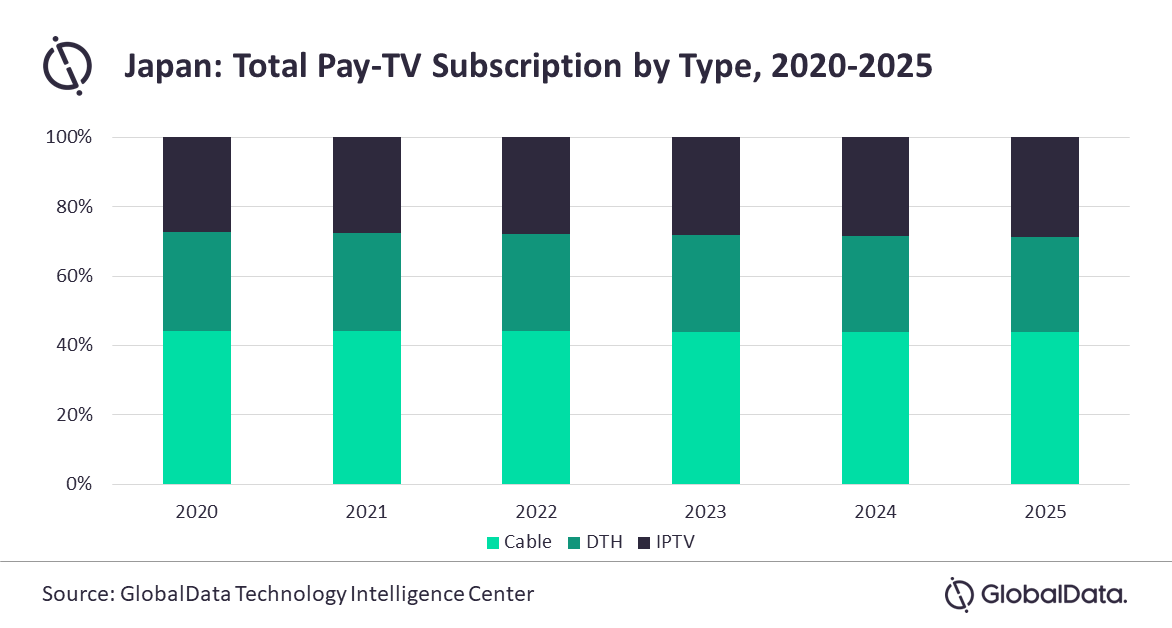 GlobalData’s Japan pay-TV Forecast Model reveals that the cable TV and direct-to-home (DTH) pay-TV accounts will decline at -0.2% and -0.8% CAGRs, respectively, between 2020 and 2025 while IPTV accounts are set to grow by 1.1% CAGR over the same period. The decline in total pay-TV accounts in the country is primarily due to the cord-cutting trend exacerbated by growing customer migration towards over-the-top (OTT)-based video platforms.

Aggregate pay-TV ARPUs will however grow from US$36.52 in 2020 to US$40.52 in 2025 with growing ARPUs from cable, DTH and Internet Protocol television (IPTV) services supporting the overall pay-TV service revenue growth

Deepa Dhingra, Senior Telecom Analyst at GlobalData, says: “Despite the steady decline in subscriptions, cable TV will account for the largest share of total pay-TV subscriptions in the country through the forecast period. IPTV’s share of total pay-TV subscriptions, on the other hand, will increase from 27% in 2020 to 29% in 2025, supported by growing fiber network coverage in the country, which supports the delivery of quality IPTV services.

“KDDI led the mobile market in terms of pay-TV subscription share in 2020, closely followed by NTT. KDDI will remain the leading pay-TV service provider through 2025. KDDI’s market leadership is because of its strong presence in the cable TV segment and growing focus on IPTV services. Both the operators have been promoting bundled packages combining pay-TV services with fixed broadband and telephony services to reduce churn rates and sustain competition from OTT service providers.”