As the country continues to emerge and adjust to post-pandemic life, it is evident that the growth and disruption of the streaming revolution continues at pace, according to a recent Horowitz Research survey of content viewers nationwide. The data show that streaming now supplants MVPD services in penetration and is closing in on time spent by viewers (see also Nielsen’s data on time spent on streaming and traditional cable).

Along with dominance comes accountability. Consumers are feeling the pain of chaos (too many streaming services) and fatigue as content is unpredictably fragmented across numerous, access-restricted streams.

In the past two years alone, the industry has seen the launch of Disney+, Apple TV+, BET+, HBO Max, Peacock, and discovery+; the rebranding and relaunching of CBS All Access into Paramount+; the launch—and shuttering—of Quibi and TVision; and the exit of PlayStation Vue and the entrance of AT&T TV, the latest iteration of DirecTV NOW and AT&T TV NOW. Consumer perceptions of chaos and their continued retention of (and perhaps nostalgia for) managed MVPD services is at this juncture not surprising. 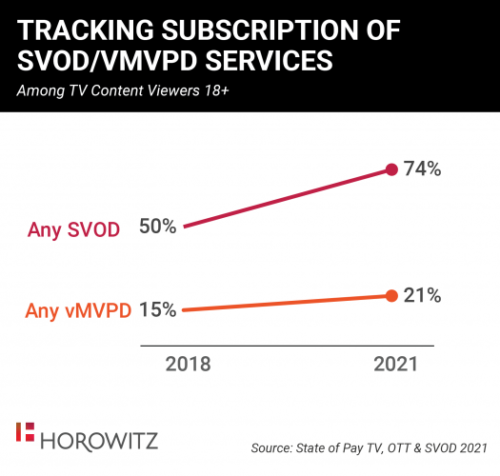 From 2018 to 2021, SVOD subscriptions increased from 50% to 74% among TV content viewers. Meanwhile, the pandemic (with the pause on sports and its economic impact) accelerated MVPD subscriber loss. Over one-third (36%) of MVPD subscribers have cut the cord within the past two years, up from 23% in 2020. Among those who have cancelled in the past year, 16% attribute COVID-19 as a key reason.

As had been reported in past waves of this survey, being able to access live TV content, watch episodes of shows on the day they air, and having access to news continue to be important to TV content viewers when making subscription decisions for their household. This could position cable as well as broadcast to hold its ground, if not rebound somewhat, going forward. However, while news content (local and national broadcast and national cable news) remains as important this year as before, fewer consumers consider the immediacy of access to content a factor in their subscription decisions. For example, in 2018, “having access to live TV” was important to three in four (76%) TV content viewers; in 2021, this dropped to 61%. Having access to brand new episodes on the day they air was important to two in three (65%) of TV content viewers in 2018; in 2021, about half (48%) consider it an important subscription driver. It remains to be seen how the return of live sporting events such as the Olympics will affect MVPD subscription rates going forward.

Streaming services provide important benefits to their users, including new show discovery opportunities. Six in ten streamers (61%) tell us that recommendations from streaming services have helped them discover content they would probably not have watched otherwise, and even cable/satellite subscribers who stream feel that the streaming experience is better (38%, compared to 24% saying that the cable/satellite experience is better). 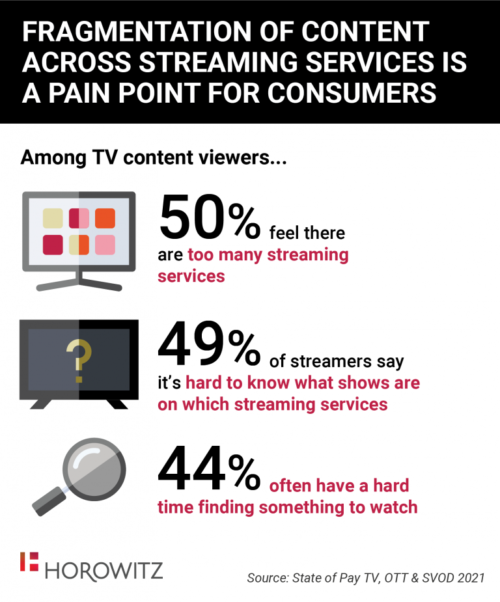 At the same time, streamers are feeling overwhelmed with the sheer number of options now available; the Horowitz survey finds that half of TV content viewers feel that there are too many streaming services (50%). New players, including industry giants Discovery and NBCUniversal, have entered an already-crowded landscape with their own-direct to consumer services, which is ultimately resulting in less content from major media brands available on streaming stalwarts such as Netflix.

Amid this chaos, streamers are struggling to keep connected to their favorite content: 49% of TV content viewers say they find it hard to know what shows are on which streaming services, and 44% say they often have a hard time finding something to watch at all.

Adriana Waterston, SVP of Insights and Strategy for Horowitz, notes, “We are at a very interesting, pivotal moment. In the early days of streaming, many media companies were concerned that their network brands no longer mattered in the new ecosystem, with so much content from so many networks consolidated and commoditized under the Netflix umbrella. With this shift towards a direct-to-consumer approach, brands matter once again—a win-win for driving both subscription and advertising revenue.”

Howard Horowitz, President of the research firm, adds that, “In many ways, what’s old is new again. The managed services approach of the pay TV ecosystem, with the ability to search and discover content across all networks in their package, helped consumers mitigate the chaos of a multichannel ecosystem. In the streaming environment, consumers are increasingly demanding universal search features to help them navigate across all their streaming apps for the same reason.”