Full stream ahead: Brits spend a third of 2020 watching TV and video

UK adults sought solace in screens and streaming in 2020, spending a third of their waking hours watching TV and online video content, according to Ofcom’s annual study of the nation’s media habits. 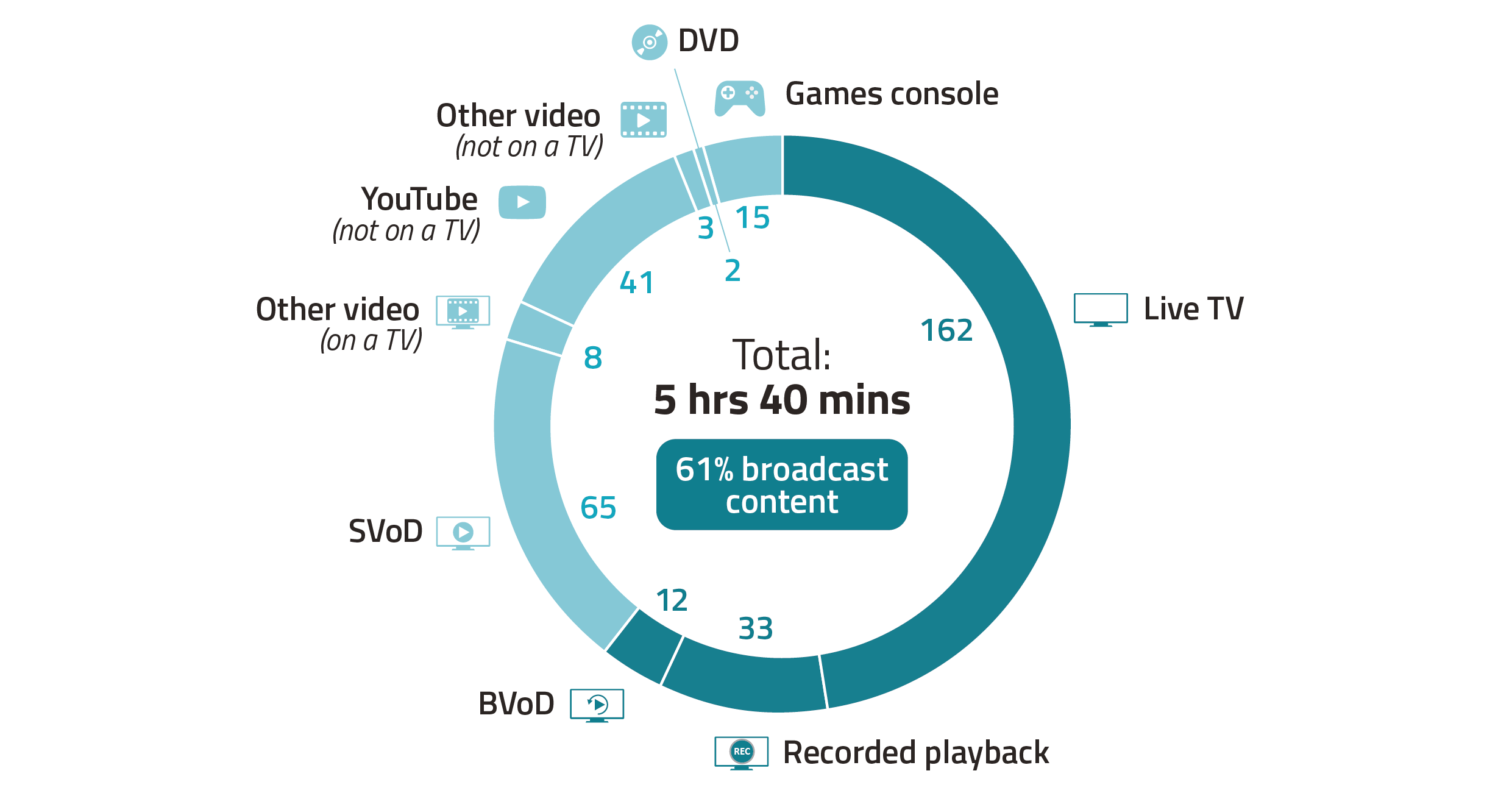 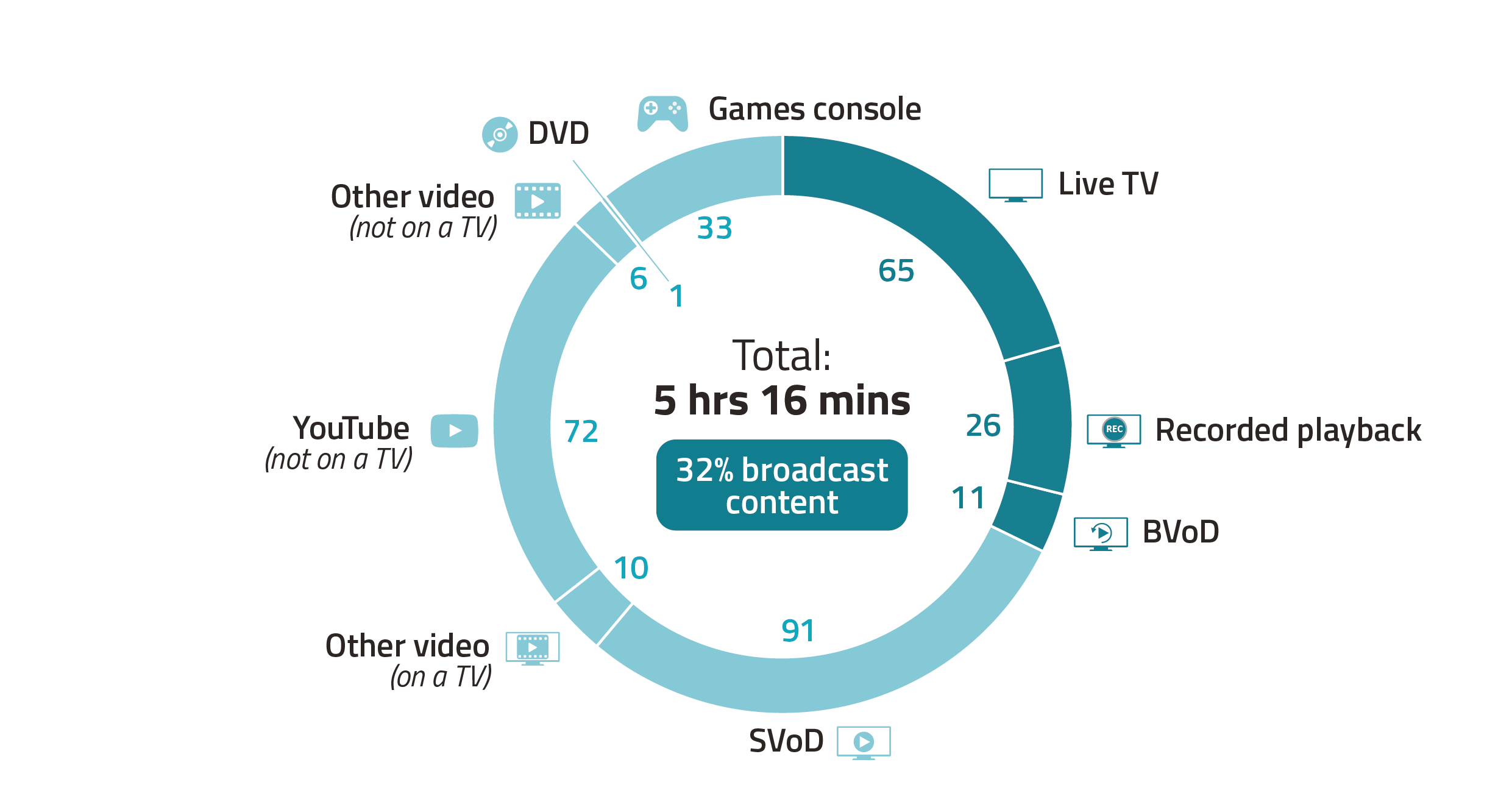 With people across the UK under some form of lockdown restrictions for most of last year, more than 2,000 hours of it were spent watching TV and online video content. That’s a daily average of five hours and 40 minutes – 47 minutes more than in 2019.(1)

The change was mainly driven by people spending almost twice as much time watching subscription streaming services (one hour and 5 minutes per day) such as Netflix, Amazon Prime Video and Disney+.(2)

More than half of UK households (52%) have taken out a Netflix subscription – meaning its customer base exceeds that of pay-TV providers combined for the very first time (48%).(3) 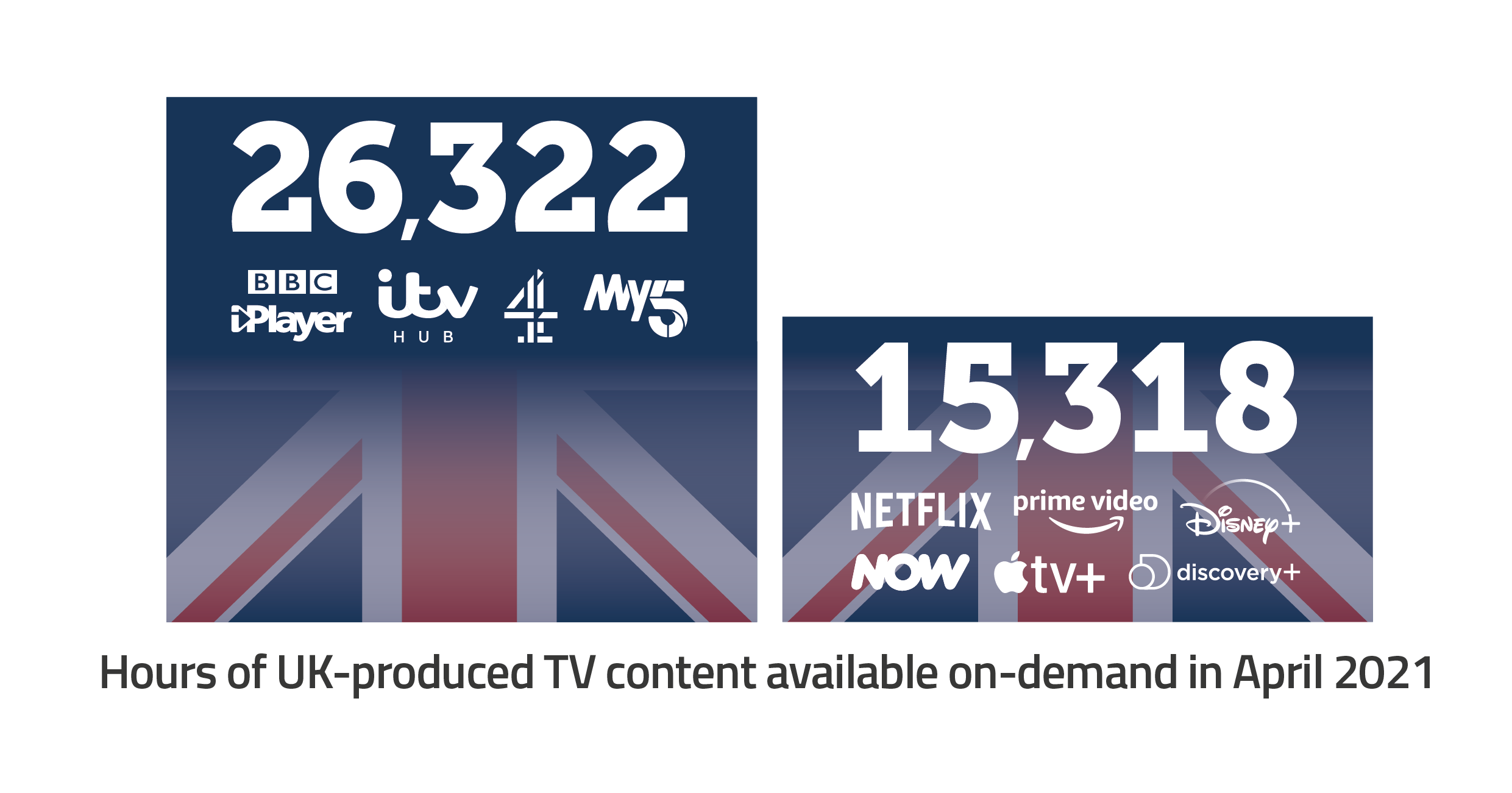 Talk of “The Ton”

By April 2021, streaming service providers were offering UK viewers a combined total of over 115,000 hours of content. Amazon Prime video’s catalogue was the largest at over 41,000 hours, followed by Netflix at around 38,000. The combined content catalogues of All 4, BBC iPlayer, ITV Hub and My5 were narrowly short of this at 37,000 hours.(5)

Twenty-nine of the top 30 most-watched titles on subscription services in Q1 2021 were on Netflix. Four of the most popular were UK-produced – Bridgerton, The Dig, Behind her Eyes and Fate: The Wynx Saga. This shows that home-grown, original programmes continue to be a significant draw for British audiences. 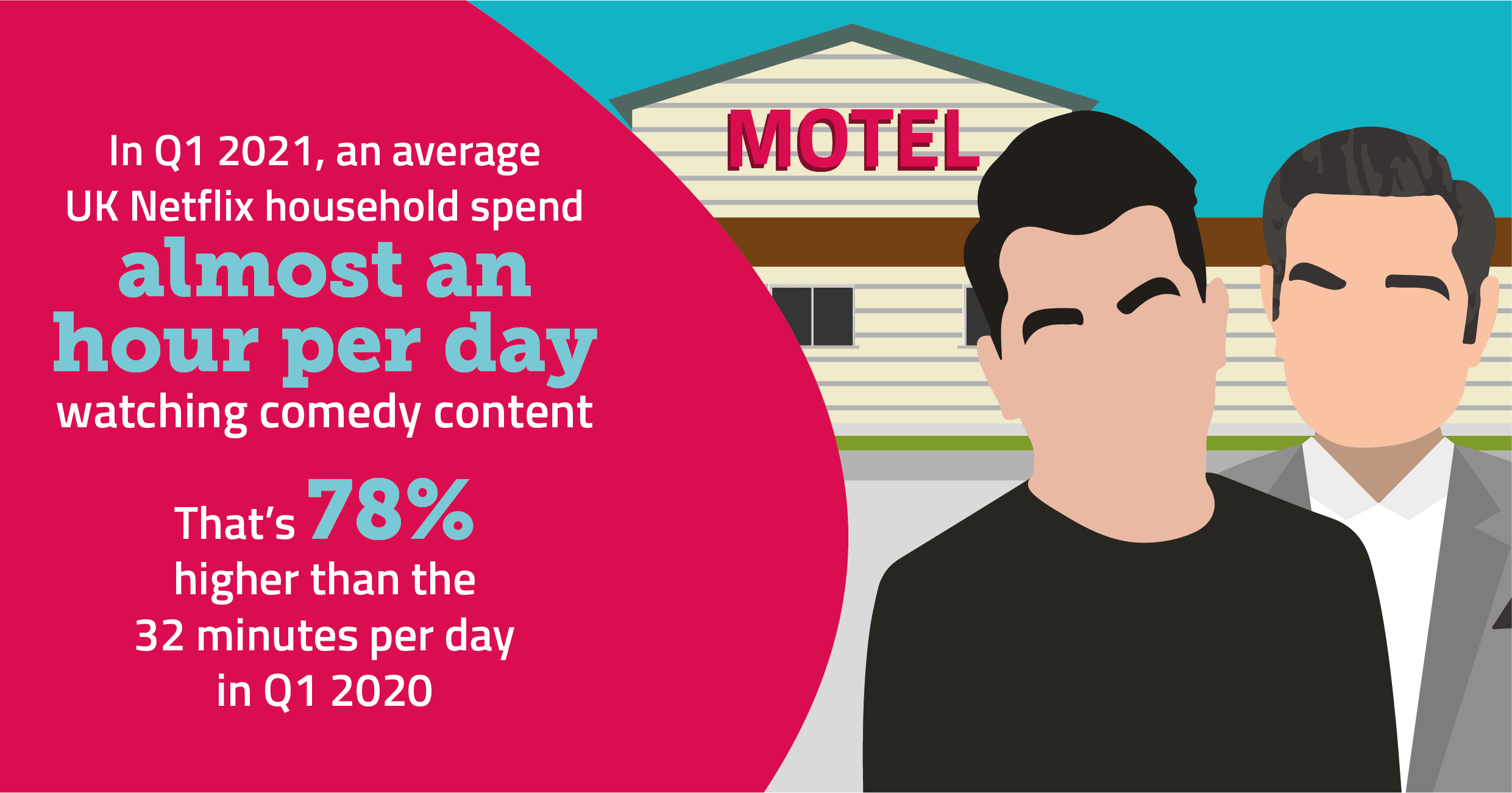 Bridgerton was a particular success, with 8.2 million homes watching by the end of March 2021, making it Netflix’s highest reaching title that quarter. Netflix subscribers also sought escapism during winter lockdown by spending almost an hour per day watching comedy programmes – nearly twice as much as a year earlier.(6)

The average time spent watching traditional broadcast TV each day in 2020 was 3 hours 12 minutes – nine minutes higher than in 2019. But this increase was entirely driven by people aged 45 and over.

Younger age groups continued to watch less broadcast TV in 2020; people aged 16-24, for example, only spent an hour and 17 minutes watching broadcast content – down from one hour and 21 minutes in 2019.

Spending by UK public service broadcasters on first-run, original programmes also dropped sharply by 18% in real terms compared to 2019. This was due to cost-cutting measures, as PSBs faced revenue challenges caused by Covid-19, as well as disruption to the production sector which caused filming delays.(7)

Yih-Choung Teh, Ofcom’s Group Director, Strategy and Research, said: “TV and online video have proved an important antidote to lockdown life, with people spending a third of their waking hours last year glued to screens for news and entertainment.”

“The pandemic undoubtedly turbo-charged viewing to streaming services, with three in five UK homes now signed up. But with subscriber growth slowing into 2021 and lockdown restrictions easing, the challenge for the likes of Netflix, Amazon and Disney will be to ensure a healthy pipeline of content and keep customers signed up.”

Notes
1. Figure includes live viewing, time-shifted viewing up to 28 days after the original broadcast, other broadcaster content such as boxsets on BVoD services that haven’t had a linear broadcast and ‘unmatched content’ like subscription video-on-demand services, YouTube, gaming, viewing DVDs/box sets/archives, time-shifted viewing beyond 28 days, apps on smart TVs and navigation around EPG guides where there is no in-picture broadcast content on the TV set.
2. UK Broadcasters’ video-on-demand (BVoD) services in comparison had mixed performances in 2020: BBC iPlayer programme requests increased by 31%, while views for Channel 4’s All 4 increased by 26%. However, ITV Hub’s long-form online viewing hours declined by 5%, impacted by the loss of reality show, Love Island, due to Covid-19 production restrictions.
3. Source: BARB Establishment Survey, Q3 2020. Note: This is due to a substantial rise in use of Netflix, rather than any drop in pay-TV subscriptions, which have remained static year-on-year. Pay TV subscriptions include Sky, Virgin Media, BT and TalkTalk. More than two thirds of Pay TV households also have a streaming service subscription.
4.Source: Ampere Analysis, July 2021. Figures are adjusted for CPI using 2020 prices.
5. Source: Ampere Analysis, accessed 8 July 2021.
6. Source: Digital-i UK, Q1 2021. Top comedy titles on Netflix included: Superstore, The Office (US) and The Big Bang Theory.
7. Spend on first-run originations declined for all public service broadcast channels in 2020, although to varying degrees. BBC Two had the largest proportional year-on-year decline (-29%), followed by Channel 4 (-25%) and ITV (-21%). Channel 5 recorded a more modest decline (-7%), probably benefiting from the significant resources of its parent company, Viacom. Spend figures are adjusted for CPI using 2020 prices.
8. TV and online viewing figures for the Euro 2020 final and semi-final have not yet been fully consolidated up to 28 days.