Another record month for U.S. streaming in April

Nielsen: Streaming Achieves Another Record-Breaking Month in April, according to The Gauge

NEW YORK — The Gauge, the monthly total TV viewing snapshot from Nielsen (NYSE: NLSN), revealed that streaming reached another record high in April, capturing 30.4% of total TV viewing and surpassing its previous record of 29.7% set in March 2022. While overall TV viewing dropped by 2.1% from March, streaming volume was virtually identical to the prior month, helping to increase its share by over 0.6%. 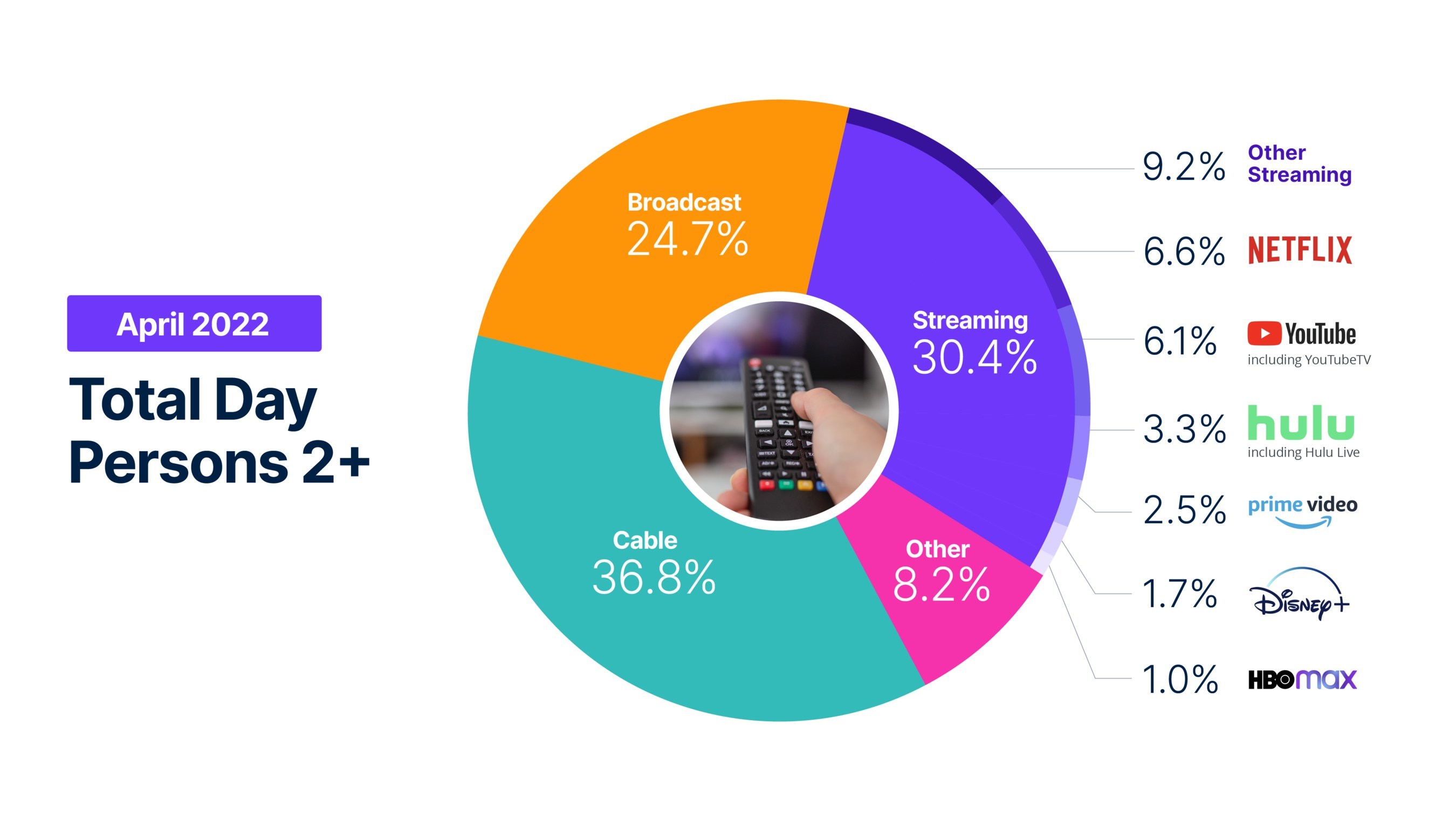 The Gauge also showed that HBO Max achieved a 1% share of streaming for the first time, allowing it to move out of the “Other Streaming” category and stand alongside fellow streaming platforms that have previously exceeded the 1% share threshold. The “Other Streaming” category, which includes any high-bandwidth video streaming on TV that is not individually broken out, has grown by more than two share points since The Gauge debuted with May 2021 data. This category’s consistent growth reflects insights into audiences’ rising engagement with the growing number of streaming platforms, as detailed in Nielsen’s State of Play report.

Broadcast viewing was down 3% in April and lost 0.2 share points from March, driven by a nearly 15% decrease in content from the Drama genre as season finales began to air, in addition to a 38% drop in sports on broadcast networks. Broadcast news viewing remained flat compared to March.

Cable also lost 0.2 share points in April and saw a month over month usage decline of 2.5%. While sports viewing on cable increased 17% from March, driven primarily by both the NBA playoffs and the NCAA Final Four, cable news saw its first downward trend in several months (-16.9%) which hampered cable’s overall share.

The Gauge is underpinned by Nielsen’s TV ratings service and Streaming Platform Ratings. The latter provides clients with audience measurement data that details the amount of time consumers spend streaming and on which platforms. This broad look at platform usage provides complimentary insights to Nielsen Streaming Content Ratings, which details viewing to subscription-based video on demand (SVOD) content at the title, program and episode level. By showcasing both the micro and macro-level data sets, the industry has a full picture of how this media is being consumed, as well as when and by whom.

Nielsen’s approach to audience measurement, which leverages a geographically representative panel of real people and big data, is built for the future of media consumption. With The Gauge, the future of TV consumption is visible in a single view.