MUNICH, Germany — Rohde & Schwarz, a global leader in broadcast media technologies, has played a leading part in an exciting public demonstration of the latest in mobile content delivery: 5G Broadcast. The presentation was made by Danish broadcasters DR and TV2, with special mobile devices provided by Qualcomm.

The Tour de France is the world’s most prestigious cycling event, and by tradition its Grand Départ stages are held outside the country. This year the first three days of the event took place in Denmark, starting with a time trial in the capital Copenhagen on 1 July. 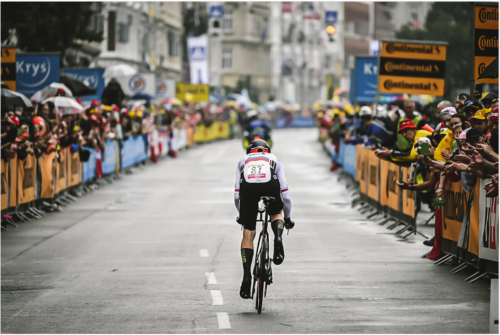 Host broadcaster TV2, looking to increase audience engagement, offered specially tailored content on 5G Broadcast, a new content delivery standard. It has a broad range of applications including localised broadcasting, public safety and IoT delivery. The advantage is that the content was not streamed over large numbers of one-to-one connections, but broadcast to devices which do not even need a SIM to receive it, eliminating network congestion and allowing broadcasters to retain the transmission rights.

For the TV2/DR demonstration, the transmission used a Rohde & Schwarz TMU9evo medium power UHF transmitter installed in Copenhagen for the project. Content was prepared by TV2 as part of its host broadcaster productions. Viewers saw the live, low latency broadcasts on smartphone-like devices from Qualcomm Technologies.

“5G broadcast is an exciting new way for consumers to connect to live video broadcasts wherever they are, adding to the experience and engagement of events like the Tour de France,” said Manfred Reitmeier, VP broadcast and amplifier systems at Rohde & Schwarz. “This was part of a continuing programme of demonstrations in association with Qualcomm to showcase what this technology can deliver, and we are grateful for the participation of DR and TV2.”

Lorenzo Casaccia, VP technical standards at Qualcomm Europe, added “This was a great demonstration of the way that 5G Broadcast can bring a new viewing dimension. People enjoyed the spectacle of the racing in front of them, while keeping up to date with all the action via their mobile devices, all without the frustrations of network congestion, and creating new revenue opportunities for broadcasters and content providers.”

5G Broadcast is an open standard, built on the 3GPP Release 16 feature set. It offers network operators and broadcasters opportunities to create new consumer experiences, including pop-up services around music and sport events like the Tour de France. The high power, high tower free to air services are also of great potential for public information and safety messaging.

It is not restricted to live and linear video distribution: it offers a completely new range of business models for delivering content or data to large numbers of receivers without affecting the regular cellular 5G mobile network. These include IoT data distribution, such as updated mapping or traffic information to autonomous vehicles and GPS receivers.