TV Usage Rose Again in October, Amplified by Uptick in Broadcast Viewing, according to The Gauge Report from Nielsen

NEW YORK — Time spent watching television climbed for the second consecutive month in October according to The Gauge, Nielsen’s monthly total TV and streaming snapshot. The 2.2% monthly increase in TV consumption was underpinned by the nearly 10% jump in broadcast viewing compared to September, bringing the category up to 26.0% of total TV usage and marking its largest share since February 2022. Streaming also grew in October to make up 37.3% of TV viewing, while cable’s share dropped to 32.9%. Overall TV usage was up 2.8% compared to one year ago. 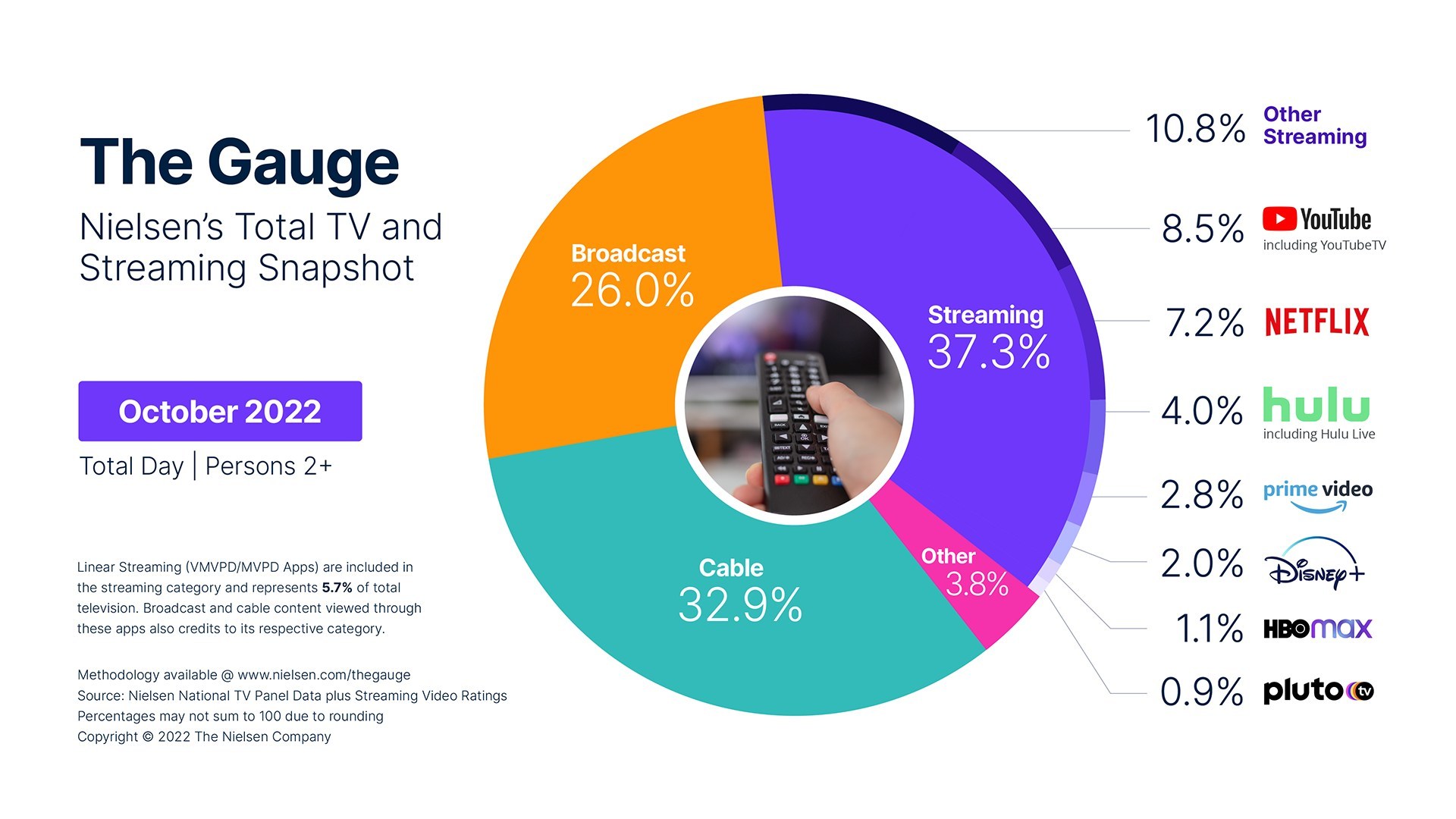 For the second consecutive month, and in line with historical trends for this time of year, the broadcast category showed the largest month-over-month increase in viewing volume (+9.8%) and share (+1.8 points) across all categories in The Gauge. While broadcast sports viewing in October increased 19% compared to September and accounted for over 25% of broadcast usage, viewing of the General Drama genre saw a 42% jump to make up nearly 27% of usage.

Compared to one year ago, broadcast viewing volume decreased 6.2% and the category was down 2.5 share points. Additionally, broadcast news viewing was up by over 15% compared to the same month last year.

Cable lost nearly a full share point (-0.9) in October due to being the only category in The Gauge to remain fairly flat (-0.7%) versus September. Cable news viewing increased 3.3% in October and remained the largest cable genre at 19.6%. Cable sports saw the highest increase in viewing (+25%) compared to last month and represented 9.6% of cable’s share.

Making up 32.9% of total TV in October, cable’s share of television has consistently declined every month since March 2022. On a year-over-year basis, cable viewing was down 8.6% and the category lost 4.1 share points. A yearly comparison also shows that cable news and cable sports viewing were up 8.4% and 4.8%, respectively, versus October 2021.

Despite observing a slower month of growth in October compared to previous months, the streaming category continued to trend upward, exhibiting a 3.3% monthly increase in viewing volume and adding 0.4 share points to represent 37.3% of television. Streaming usage grew by 35.1% compared to the same month one year ago, and the category gained 8.9 share points.

The month-to-month consistency of most streaming services called out in The Gauge contributed to another month of growth for the category:

This chart only includes streaming services that have been reported in The Gauge for 12 months or more as of October 2022. Source: Nielsen Streaming Platform Ratings.

Note: As of September 2022, the streaming category is reported on a Live+7 viewing basis. It was previously reported on a live-only basis. This change tracks with the growth of linear streaming on MVPDs (such as cable provider apps) and vMVPDs (such as Youtube TV and Hulu Live), and the impact of time-shifted viewing on these platforms.