Mediavision: Nordic streaming customers are positive to subscriptions with ad

Subscription video on demand services, SVOD, exist in most Nordic households today. However, in line with the market approaching maturity, growth has diminished, and competition has intensified. Going forward, this could prompt more actors to offer cheaper subscriptions with advertisements, i.e., HVOD (hybrid video on demand). When Mediavision asks the customers, interest for this kind of service is high in all Nordic countries. 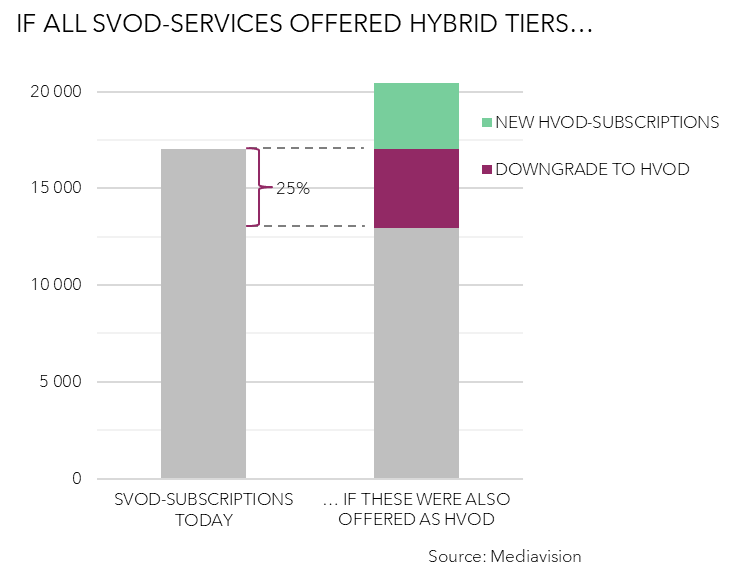 Today, there are approximately 17 million SVOD subscriptions on the Nordic market, distributed over slightly more than seven million households. If today’s customers were to decide, a little more four million of those subscriptions would be converted into cheaper subscriptions with advertisements. This is concluded in Mediavision’s recently published analysis of the Nordic TV and streaming market. Further, the analysis shows that lower pricing could generate additional, new subscriptions – both in existing SVOD households and among those that have not yet signed up for an SVOD subscription. In total, this would expand the market.

So far, a relatively small number of households pay for a subscription service partly financed by advertising in the Nordics. Currently, this kind of service is mainly offered by legacy businesses within the TV-industry, e.g., Danish and Norwegian TV 2 Play, Finnish Ruutu Plus and Discovery Plus.

“Interest in subscriptions partly financed by advertising is especially high among households paying for several subscriptions. Expectedly, the analysis shows that pricing plays an important role in consumers’ willingness to sign up for a subscription,” comments Marie Nilsson, CEO of Mediavision. “Increasing price sensitivity among consumers in times of economic uncertainty does not come as a surprise either. Hence, cheaper subscriptions partly financed by advertising appears to be a viable route for SVOD actors to induce further growth. Mediavision’s conclusion is that new hybrid offerings could have a successful future in the Nordics.”