LONON — Macroeconomic weakness is leaving its stamp on consumer device markets, and virtual and augmented reality devices — often referred to together as extended reality — are no exception, according to the latest research by technology market analyst firm CCS Insight. The company expects global unit sales in this segment to remain just short of 10 million in 2022, growing to 11.4 million in 2023.

“High inflation has hit consumer budgets in many major markets this year, and some people, who in better circumstances would have treated themselves to a virtual reality headset this year, have postponed their purchase”, notes Marina Koytcheva, Vice President of Forecasting at CCS Insight. “We’re also seeing signs of businesses being more cautious in their investment in extended reality until the economic picture becomes clearer”, adds Koytcheva.

These trends are expected to continue during most of 2023, although a bright spot will be the arrival of the new Sony PlayStation VR2 headset, spurring some consumer demand.

In these circumstances, the $100 rise in retail price of the most popular virtual reality headset, the Meta Quest 2, is also hindering sales. “The price of the Quest 2 used to be very attractive, right at the sweet spot where the next generation of tech enthusiasts would consider buying one”, explains Leo Gebbie, Principal Analyst for Connected Devices. “The higher price is more than what potential owners of VR devices are willing to pay, which is a problem for a segment seeking growth”, he says.

Another major obstacle to the adoption of extended reality is the time needed to build light and attractive smart augmented reality glasses. “It’s understandable that large technology players are being cautious: no one wants to risk disappointing buyers by bringing out a product that isn’t quite ready”, suggests Koytcheva. “We’ve been expecting smart glasses to come to market for a while now, but the technology is proving tricky to master”, she states. CCS Insight’s latest forecast now expects some devices to be revealed in 2023, with some sales in 2024, but only reaching more significant numbers from 2025 onward.

Because of these setbacks, CCS Insight now predicts that unit sales of extended reality devices will build up more slowly than previously projected, reaching 67 million units in 2026. Of those, 11 million, or 16%, will be sold to businesses and other organizations where extended reality technology is showing great promise for use in customer support, remote service, training, marketing and more. But the bulk of sales will be to consumers eager to get their hands on the latest technology.

“The outlook for extended reality remains positive, as the technology forms part of the metaverse vision shared by many large players in the industry”, affirms Gebbie. “The vast sums that have been invested in the metaverse, despite its nebulous nature, show that there’s real appetite for building immersive spatial computing experiences for all sorts of application. There’s already lots of momentum behind this vision, and despite a lull in the coming years, we expect the metaverse bandwagon to keep rolling on”, he concludes.

A summary of CCS Insight’s new forecast is presented in the chart below. 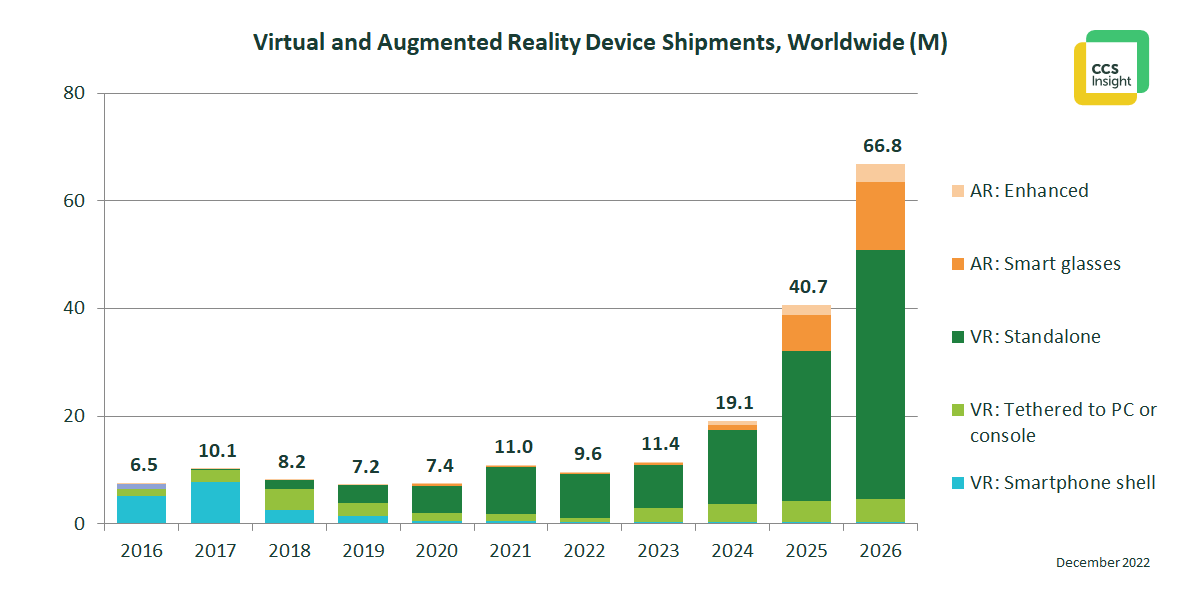