Nielsen: TV Viewing Surged in November, Powered by Sports and Streaming Content, according to The Gauge

NEW YORK — Nielsen’s latest report from The Gauge, the media measurement company’s monthly snapshot of total TV and streaming usage in the U.S., revealed that time spent watching television climbed considerably in November, marking the second-highest month of overall TV consumption in 2022, trailing behind January. The Gauge reported five days in November with over 100 billion minutes of TV viewing, including Thanksgiving Day (November 24) when audiences spent nearly 106 billion minutes in front of television screens. Thanksgiving ranked as the No. 2 most-watched day of TV so far in 2022, second to Sunday, January 16 which racked up over 107 billion minutes that were largely driven by three NFL Wild Card games. 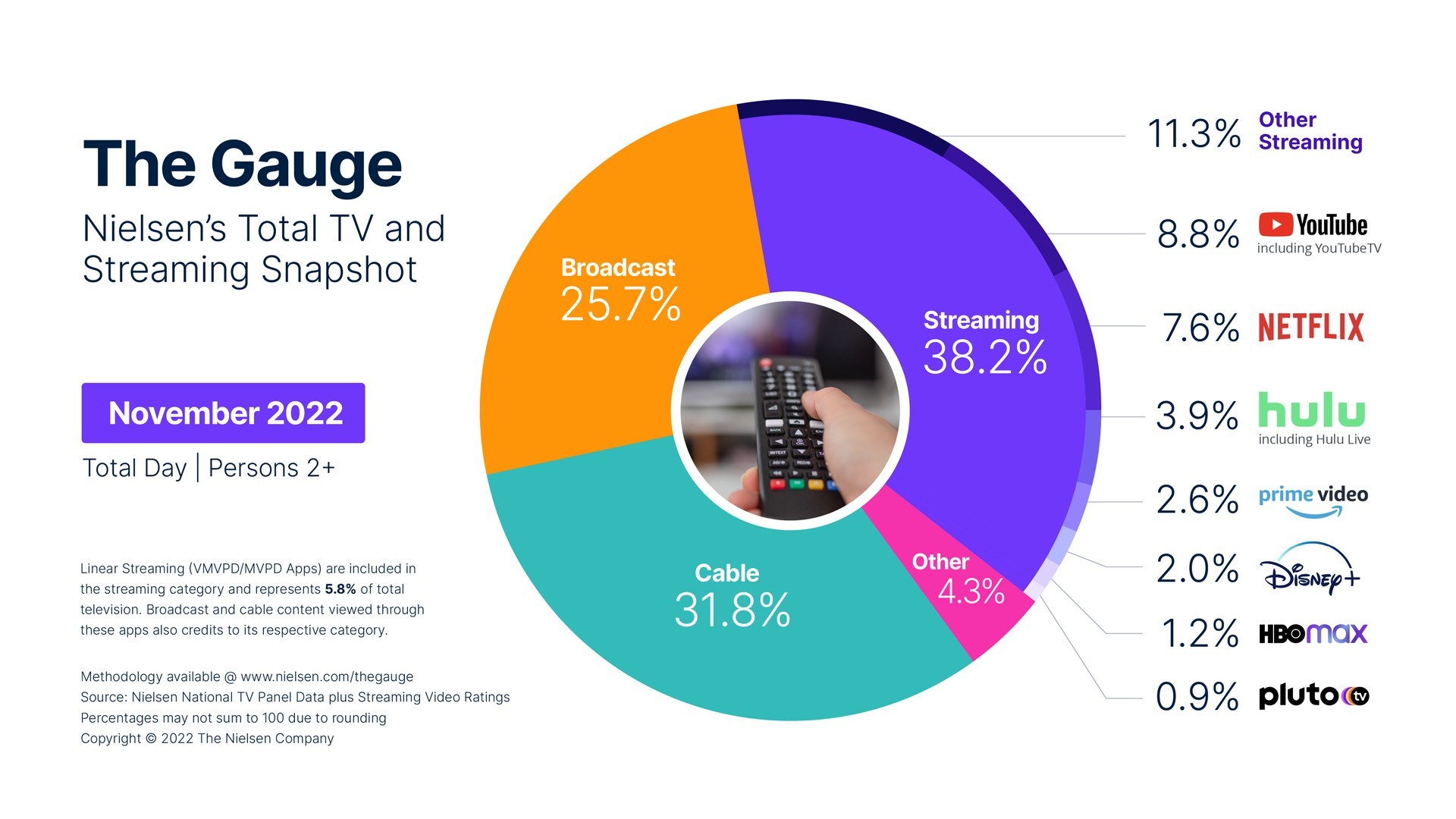 Overall TV usage climbed 7.8% from October, and viewing volume was up for all categories across The Gauge on a monthly basis. Streaming saw the largest monthly increase in November with a 10.2% bump in usage, which brought the category to 38.2% of total TV viewing and set another record share for the digital format. Compared with November 2021, streaming usage grew by 41.2% and the category gained 9.7 share points.

From a streaming platform perspective, Netflix, HBO Max and YouTube all achieved double-digit viewing increases in November, up 13.1%, 12.2% and 11.8%, respectively versus October. Netflix also saw the most significant monthly increase in share (+0.4) to finish November with 7.6% of TV.

Broadcast usage rose 6.7% from October, but due to the large increase in total television usage, its share of TV dropped slightly (-0.3 points) to 25.7%. Primarily driven by NFL programming, World Cup coverage, and four World Series games, broadcast sports viewing jumped 10.2% and accounted for the largest share (32%) of the category’s viewing total. Broadcast news viewing was also up 14.6% compared with October, and viewing to the drama genre declined by over 12%.

Total broadcast viewing in November was fairly similar compared with the same month one year ago (-0.7%), and from a share perspective, broadcast lost 1.6 share points. Additionally, broadcast sports viewing was down 5.6% on the year, while broadcast news viewing was up 19%.

Cable gained the smallest amount of monthly growth among viewing categories in The Gauge (+4.2%) and ended November with 31.8% of total TV usage, representing a monthly loss of 1.1 share points. The increase in cable viewing was driven by the feature film genre, which climbed 32.7% to make up 18.7% of cable’s total, and cable news (+1.4% on volume), which remained the top genre for the category with 18.9%.

On a year-over-year basis, time spent watching cable content declined 9.3% and the category lost 5.1 share points. A yearly comparison also shows that cable sports and cable news viewing were up 19.6% and 17.6%, respectively, versus November 2021.

The Gauge is Nielsen’s monthly snapshot of total TV and streaming usage in the U.S. It is underpinned by Nielsen’s TV ratings service, in addition to Streaming Platform Ratings which provides clients with audience measurement data that details the amount of time consumers spend streaming and on which platforms. This broad look at platform usage provides complimentary insights to Nielsen Streaming Content Ratings, which details viewing to subscription-based video on demand (SVOD) content at the title, program and episode level. By showcasing both the micro and macro-level data sets, the industry has a full picture of how this media is being consumed, as well as when and by whom.

Nielsen’s approach to audience measurement, which leverages a geographically representative panel of real people and big data, is built for the future of media consumption. With The Gauge, the future of TV consumption is visible in a single view. The latest edition of The Gauge is always available at www.nielsen.com/thegauge.

Note: As of September 2022, the streaming category is reported on a Live+7 viewing basis. It was previously reported on a live-only basis. This change tracks with the growth of linear streaming on MVPDs (such as cable provider apps) and vMVPDs (such as Youtube TV and Hulu Live), and the impact of time-shifted viewing on these platforms.