Nielsen: Audiences Extend Viewing Momentum into December, according to The Gauge

NEW YORK — Nielsen’s December 2022 TV usage summary from The Gauge, the media measurement company’s monthly snapshot of total TV and streaming consumption in the U.S., revealed that TV viewing remained high in December, continuing momentum from November when time spent watching television soared 7.8% from the month prior. Similar to November 2022, December also recorded five days with over 100 billion minutes of TV viewing, including two of the top 10 most-watched days of television in 2022 (December 18 and December 25). 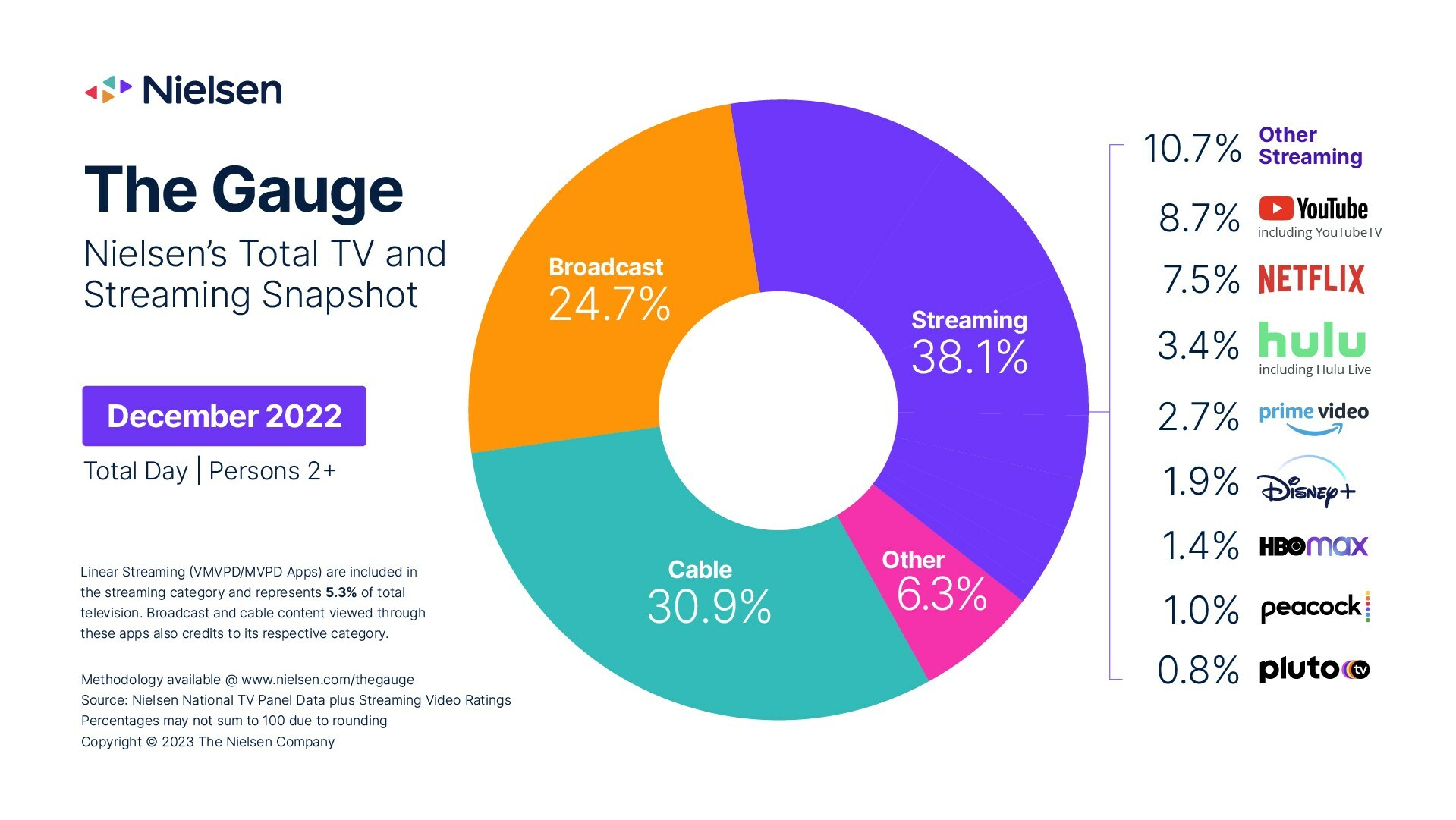 While December’s TV usage was fairly flat on a monthly basis, the slight 0.3% increase gave it an edge over November to solidify it as the second-highest month in overall TV consumption in 2022, behind January. Despite a robust month of TV usage, the Broadcast, Cable and Streaming categories all lost in share, leaving the “Other category” as the only to gain in December (+2.0 share pts.). Growth of the “Other category” was driven in part by increased video game play.

Similar to overall TV usage, December streaming usage was nearly even with November (+0.2%) and represented 38.1% of TV, losing one-tenth of a share point due to rounding. Compared with December 2021, time spent watching streaming content was up 46.1% on a yearly basis and has gained 10.4 share points, climbing from 27.7% to 38.1% of total TV usage.

Peacock made its debut in The Gauge this month, initiating coverage with a 1.0% share of TV and consistent growth demonstrated across previous measurement intervals. Peacock’s success in December coincides with the success of the Peacock Original The Best Man: The Final Chapters, which was released just before Christmas. Monthly changes across other named streaming platforms include:

Broadcast usage was down 3.7% from November, and the category lost a share point to finish at 24.7% of total television. The decline to broadcast viewing was driven by a sharp decrease in viewing to the general drama genre (-20%), and broadcast sports (-12.3%). Broadcast viewing in December was fairly flat compared with one year ago (+0.3%), and the category lost 1.4 share points.

Cable viewing declined 2.4% versus November to end the month with a 30.9% share of TV. The changes in cable were driven by a 10.2% drop to cable news viewing, and the feature film genre, which jumped nearly 5% to 22.1% of cable viewing. On a year-over-year basis, time spent watching cable content declined 12% and the category lost 6.4 share points.