BEIJING — Analysys International, a leading advisor of technology, media and telecom (TMT) industries in China, says in its recently released report China DTV Market Quarterly Tracker Q4 2008, that China DTV subscribers has reached 45.1 million in the last quarter of 2008, and representing a increase of 13.5% quarter on quarter, the main reason of increase is that upgrading was restarting in these area where was frozen because of the Beijing Olympics in the third quarter, especially some county and district cities are still waiting for upgrading and some of them lack of budget for upgrading, so the increase speed is lower than the expectation.

According to the figures released by Analysys’ Enfodesk™, the domestic manufacturer China Digital TV is dominating the market with share of 50.5%. Digital Video Networks and Sumavision both increase lot compared with the previous quarter. As for the foreign manufacturers, DNS, Irdeto and Nagravision can’t compete with locals well because of the card distribution limitation. 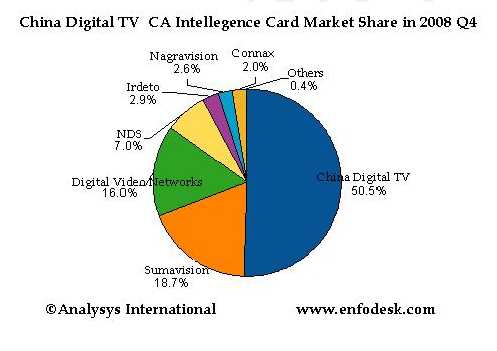