Despite years of big growth and even bigger hype, the network-delivered rental and sale of videos continued to represent only a small portion of the U.S. home video entertainment market in 2010, as consumers flocked to buy and rent Blu-ray discs, according to Screen Digest, now part of IHS Inc. (NYSE: IHS).

The U.S. home video entertainment market, consisting of the rental and sale of movies and television shows either on physical media or via networks, amounted to $18.5 billion in 2010, Screen Digest’s preliminary forecast indicates. Network-delivered rentals and sales via the Internet and subscription TV systems accounted for $2.3 billion of this revenue, representing 12.2 percent of the total market.

Growth in network sales and rentals was dwarfed by the growth in the sales and rentals of Blue-ray titles. Revenue from all types of network delivery rose by 21.9 percent for the year, while Blu-ray retail sales soared 64.2 percent and rentals boomed by 105.5 percent.

“With consumers continuing to be very cautious in their spending habits, the popularity of the rental model reasserted itself in 2010,” said Tom Adams, principal analyst and director, U.S. Media, for Screen Digest. “This consumer mindset sent Blu-ray rentals soaring and could be seen on the Internet too, where video-on-demand (VOD) rentals jumped 55.7 percent. In contrast electronic sell-through (EST) on networks grew by just 27 percent.” 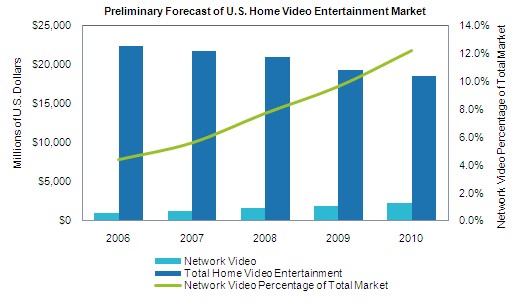 The rise of the U.S. Blu-ray and network-delivery markets in 2010 contrasted with the 3.8 percent decline in overall home video entertainment spending for the year.

The biggest factor driving the decline in the market was a 15.6 percent plunge in DVD retail sales, amounting to a $1.5 billion decrease in revenue. DVD retail sales represent the largest single component of the U.S. home video entertainment market.

The next most significant factor was the DVD rental segment, which declined by 12.4 percent, or $749 million.

These two factors caused the entire U.S. market for retail sales and rental of physical home video entertainment products to decline by 6.5 percent for the year.

While the network segment remained only a small portion of the overall market in 2010, it did achieve a significant milestone for the year: For the first time ever, network sales and rentals exceeded 10 percent of total U.S. revenue during a year, amounting to 12.2 percent of the U.S. home video entertainment market in 2010, up from 9.6 percent in 2009.

“At 88 percent of the total, physical media continues to capture the lion’s share of the home video entertainment market, which is why studios are so focused on successfully transitioning from DVD to Blu-ray,” Adams said. “But Screen Digest expects the network segment to gain share in the overall market during the coming years, leaving studios with a delicate balancing act as they attempt to revive growth in overall home video entertainment revenue in this post-recession era.”