Global unit shipments of consumer electronics (CE) products will climb 2.6 percent in 2010, partly driven by rising sales of products that play a role in the connected home and that focus on usability–rather than technological wizardry–according to new IHS iSuppli research. 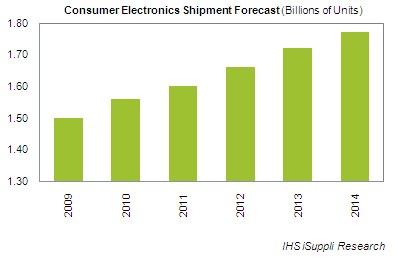 “While the 2.6 percent rise in overall shipments this year is modest compared to last year’s 4 percent climb, the expansion is significant given current economic conditions,” said Jordan Selburn, principal analyst for consumer platforms at IHS. “Amid the continued uncertainties in the global economy and the high unemployment rate in the United States–the world’s largest market for CE devices–the uptick in sales provides reassurance for the industry and sets the stage for future growth.”

Unit shipment growth will accelerate to 4.4 percent in 2012.

Units Up, Revenue Not So Much

CE revenue in 2011 is not predicted to grow by nearly as much as unit shipments. In particular, the substantial price declines that began in 2010 are expected to continue in 2011 for CE devices such as e-book readers.

Televisions also will be responsible for some of the contraction occurring in revenue. Although enjoying strong sales, television pricing will be eroded by deep discounts from retailers, impacting total CE revenue.

Other high-volume consumer systems, such as portable media and MP3 players, will continue to face competitive pressure from rival solutions–such as smart phones and tablets–which subsume features of the original device, also depressing CE revenue in the process.

Making the Connected Home a Reality

While the concept of the connected home has been around for some time, the technology with which CE devices communicate with one another as well as with the outside world has yet to achieve mainstream adoption.

The connected home concept is actually synonymous with the “connected consumer,” an environment in which consumers have access to all of their media content, anywhere and at any time, seamlessly and transparently regardless of location or authorized consumption device, whether that device is a large-screen television, bedroom docking station, media tablet or smart phone.

One factor inhibiting broad acceptance is usability; for a particular consumer technology to enjoy widespread recognition, consumers must be able to use it–and the product implementing the technology–even without understanding the mechanism or process involved.

This explains the success of Apple Inc.’s iPad–a plug-and-play device ready for use and enjoyment right out of the box. Non-tech-savvy customers can buy the product and use it without cracking open the manual–which is what it takes to succeed in the consumer world, IHS iSuppli research shows.

Companies that focus on clear and easy usability instead of technological fireworks will stand out in the market. Their products will gain traction, especially as retailers embrace and implement the concept at the heart of their operations–as Best Buy is expected to do in 2011.

In addition to usability, a major factor for determining the success of consumer electronics devices will be their long-term future in the connected home environment.

While the market for a product such as the set-top box may eventually saturate, the device itself will continue to fulfill key functions of content access and distribution–assuring its place in the consumer pantheon for some time to come.

In contrast, the portable media player–while appearing to have a spot in the digital living room in acting as the primary portable media-rendering device–is rapidly being superseded by the smart phone and the tablet, which offer the same music-playing capabilities plus much more.

The potential to maintain an existing role in the connected home explains why some systems–like set-top boxes–will continue to enjoy demand from CE users, while other devices will slowly become obsolete.