EL SEGUNDO, Calif. — Amid a plunge in subscribers for cable, and now satellite providers, Internet protocol television (IPTV) was the only segment of the U.S. pay-TV market to achieve growth in the second quarter, according to a new report from information and analytics provider IHS (NYSE: IHS).

The main culprit for the pay-TV market’s decline was the cable segment’s loss of 588,000 subscribers. While that was slightly better than the 598,000 customers that cable shed during the same time last year, the decrease still represented a major plunge for the embattled business. Meanwhile, satellite’s decline widened to 162,000 subscribers, up sharply from 62,000 a year ago. 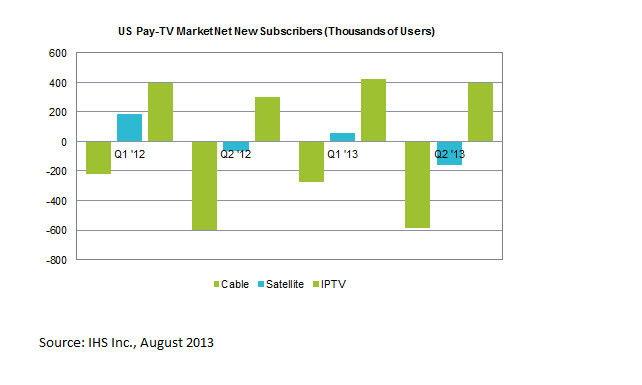 “Of the three segments in the U.S. pay-TV market, the IPTV sector is enjoying growth, especially in urban areas where it is luring subscribers away from satellite,” said Erik Brannon, analyst for U.S. television at IHS. “In particular, satellite’s lack of a true high-speed Internet service or a triple-play bundling option puts it at a disadvantage when competing against IPTV and cable. Cable, meanwhile, has its own problems, including disagreements between operators and content providers over rising programming costs that squeeze customers in the middle.”

The recent tiff between CBS and Time Warner over carriage fees–with CBS going black on Time Warner and the cable giant’s subscriber base then getting locked out of CBS programming–demonstrates the kind of difficulties that cable could endure in the future, Brannon noted.

US subscribers tune out pay-TV

The internecine fight among the three rival segments is particularly acute because the overall base of potential new subscribers is diminishing over time. The decline in the second quarter means that the total number of U.S. pay-TV subscribers will contract by 146,000 during the initial six month of the year, the first time ever that the industry began the first half of a year with a net loss in pay-TV customers.

More significantly, 2013 is set to mark the first year ever that there will be an annual decline in total U.S. pay-TV subscriptions, IHS projects. Subscribers are set to decline to 100.77 million, down from 100.89 million last year.

The market’s decline can be traced in part to the growing number of so-called “cord-nevers”– those who object to ever having a pay-TV subscription, and instead get their TV programming exclusively via over-the-top services like Netflix or through other sources. Equally as important, the price of a typical pay-TV subscription remains high, staying well out of reach for a number of consumers. Confronted with economic choices, IHS believes that consumers are likely to opt to keep their cellular and high-speed data service over a pay-TV subscription.

Both AT&T and Verizon, however, appear to be bucking the trend of a shrinking customer base. AT&T’s Uverse attracted 233,000 new subscribers in the second quarter–its second-largest sequential increase since 2009. Verizon’s FiOS, meanwhile, showed it had plenty of room for growth by gaining 140,000 new subscribers. Already, Verizon has achieved a 50 percent penetration rate in the pay-TV market of Dallas, Texas, its first area of launch.

For their part, both cable and satellite–bleeding from customer defections or non-renewals–are exploring opportunities to diversify services, including new paradigms to deliver content to the home and even completely new fields like home-monitoring services.

For instance, DirecTV, which lost 84,000 customers in the second quarter, will be the latest pay-TV provider to offer services related to home security via a recent acquisition engaged in that market. Home security ostensibly will provide a new revenue stream, offering significant upselling opportunities that come in the presence of a video installation.

Other potential revenue boosters for cable and satellite providers include the “TV Everywhere” solution that allows content to also be accessed on computers, smartphones and tablets; and initiatives like Cox Communications’ flarewatch, the first pay-TV-owned broadband-delivered IPTV service.