Shipments of OTT-enabled devices set to reach 1.7 billion this year

EL SEGUNDO, Calif. — In a sign of how profoundly Internet-based media is revolutionizing the way consumers access video entertainment content, more than 1.7 billion devices capable of accessing over-the-top (OTT) broadband content like Netflix and Hulu are set to ship by the end of 2013.

Shipments of OTT-capable devices will rise 20 percent this year from 1.43 billion units in 2012, according to a new Consumer Electronics Topical Report from IHS Inc. (NYSE: IHS). At 1.7 billion units, this will equate to enough OTT systems to accommodate almost one out of every four people on the planet.

The market will grow another 20 percent next year, on its way to some 2.67 billion units by 2017, as shown in the figure. By then, total shipments will have expanded by 86 percent from 2012 volumes—phenomenal growth by any measurement. 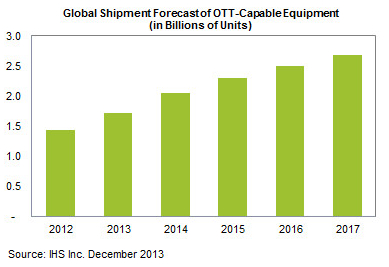 Promising a new paradigm on how to access broadband media, OTT devices allow consumers to watch or listen to content from a wide range of places and through an extensive array of playback systems. The model for such consumption is called over-the-top because the media being retrieved comes on top of a data connection, in many cases separating the content provider from the data or service provider. The former can be an entity such as Amazon, one of the more widely known OTT content purveyors besides Netflix and Hulu. The latter can be any of the cable or telco giants providing cable or Internet service.

“Content owners, operators and consumers all are driving the proliferation of the OTT model,” said Jordan Selburn, Senior principal analyst, consumer platforms. “Content owners want to expand the market for the films, music and videos they own. Meanwhile, operators wish to use OTT in order to add value to their services and keep subscribers from cancelling TV subscriptions in favor of purely broadband connections—preventing what the industry calls ‘cutting the cord.’ Consumers, for their part, desire access to a wide variety of media at the time and place of their own choosing.”

The majority of OTT devices now are either PCs or smartphones, which together accounted for 836 million of the 1.43 billion OTT-capable boxes shipped last year. Even though the primary task of the two devices is voice and data, both are also increasingly being used as media portals.

But even discounting PCs and smartphones, the rest of the OTT device market is extremely large and growing at an accelerating rate. Approximately 480 million of such non-PC, non-smartphone devices will ship this year, up 30 percent from 2012.

The only segment not forecast to grow this year is the handheld game platform. Like other single-tasking systems, the space is under attack from more broadly based general-purpose equipment, primarily smartphones and tablets. For the same reason, digital media adapters have been slow to gain acceptance, lagging behind other OTT devices and making up less than 1 percent of the total OTT market this year.

At the heart of each OTT-capable device are advanced semiconductors—the guts of each OTT system allowing them to connect with, and then process, the content to be consumed. Today’s chips allow OTT devices to plug into high-bandwidth, media-quality data streams, send it to other similarly capable devices in the home, and then handle the content without draining either the system’s battery or the consumer’s wallet.

The hurdle for such chips continues to climb, however, because the technical requirements imposed by OTT media are weighty. For instance, the newest media coding standard known as high-efficiency video codec requires substantially more computational power than earlier standards, and a brute approach relying on software alone would not suffice, draining a mobile device’s power, as an example.

At the same time, such challenges present rich opportunities for semiconductor suppliers as new standards and technologies continue to expand the market. The introduction of new and innovative technologies will inevitably require a new generation of semiconductors, with advancements made possible only from new silicon.