PLANO, TX — According to new data from The Diffusion Group (TDG), more than 60% of broadband households have at least one television connected to the Internet such that it can receive entertainment services like Netflix and Pandora.

“Though broadband diffusion may be slowing as the market matures, the expansion of broadband-connected TVs continues at rapid clip, up 19% in the last year,” noted Michael Greeson, TDG president and director of research. 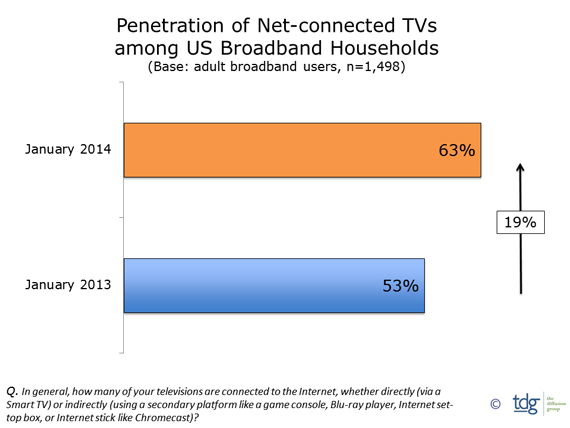 Benchmarking the Connected Consumer, 2014, TDG’s January 2014 study of US broadband consumers, found that 63% of US broadband households have at least one net-connected television, up from 53% at the beginning of 2013. This includes TVs connected to the Internet either directly as in a smart TV, or indirectly via ancillary net-to-TV devices like game consoles or Internet sticks.

The data found that, among broadband households with a net-connected TV, average ownership is 1.6 units, meaning a large portion of users own multiple net-connected TVs. In fact, 42% of connected TV owners have two or more such configurations.

“Whether net-to-TV video will somehow topple traditional pay-TV service models has been a red herring from the beginning,” says Greeson. “The real debate is the extent to which the growing availability and expanding use of ‘OTT TV’ services will have on the time viewers spend watching traditional pay-TV given the growing array of sources at their disposal. While not a simple a zero-sum game, we are nearing or at that breaking point where the growing use of broadband-based sources simply chips away at time once spent using traditional sources. This is hardly a radical argument, and made all the more inevitable given these new findings.

TDG’S Q1 primary research study – Benchmarking the Connected Consumer, 2014 – surveyed randomly 1,500 adults that subscribe to a home broadband service. The project examines a broad array of behaviors across a multitude of net-connected devices, from net-connected TVs to tablets, and from PCs to smartphones. This is the fourth iteration of this annual study. For more information about this project, please contact TDG at 469-287-8050 or [email protected]