BOSTON, MA — The majority of Smart TV1 shipments in the United States were fulfilled by Samsung and Vizio Flat Panel TVs (FPTV) in Q4 2013 as most major TV vendors put a priority on Smart TV features to differentiate their products in the crowded FPTV market, according to the latest Strategy Analytics research, “United States Smart TV Market Share Report Q4 2013.” 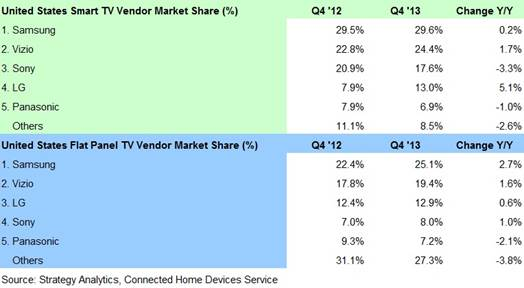 Other findings from the report included:

David Watkins, Director of Connected Home Devices at Strategy Analytics, said: “We are witnessing a precipitous drop in the price delta for Smart TVs compared to their traditional counterparts, reflecting the expectation of major TV vendors that they will make more money down the road from content partnerships rather than upfront on higher hardware costs. Though it remains to be seen how quickly this scenario will materialize, the immediate need for Over-the-Top content on Ultra HD TVs may be a catalyst.”

Eric Smith, Analyst of Connected Home Devices at Strategy Analytics, added: “We expect that Smart TVs will comprise more than half of all FPTV shipments in the U.S. in 2014, but the Smart TV market will continue to be dominated by a handful of vendors at the top. Vendors competing solely on price will be slow to embrace Smart TV.”

1. Strategy Analytics defines Smart TVs as subset of Connected FPTVs that have broad internet access and include advanced smart functionalities.