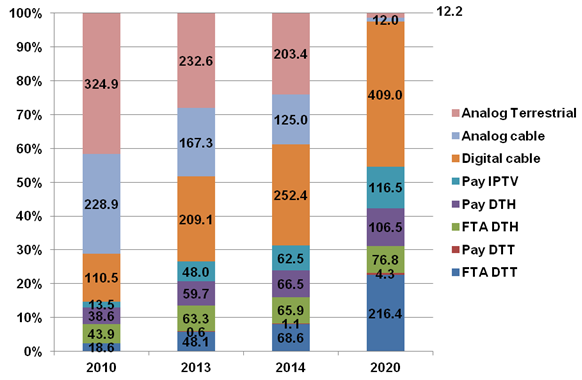 The Digital TV Asia Pacific Forecasts report reveals that China will provide 225 million of the extra digital TV homes, with India adding a further 118 million. However, 159.6 million homes in the region will not own a TV set by 2020, although this is down from 195.9 million in 2013 and 221.8 million in 2010.

China and India have a massive influence, with a combined 663 million TV households (or 70% of the region’s total) by 2020. China has as many TV households as Europe and North America combined.

Simon Murray, author of the report, said: “Despite the rapid conversion, digital TV will still have plenty of room for growth for some time to come. Only 12 of the 22 countries forecast in this report will have fully converted to digital by 2020.”

Of the 501 million digital homes to be added between 2013 and 2020, 172 million will come from DTT. However, the number of analog terrestrial homes will fall by 220 million. Digital cable will contribute a further 200 million additional homes, with analog cable losing 155 million. Pay satellite TV will supply an extra 47 million, with FTA satellite TV adding 14 million. Pay IPTV will record 69 million more subs.

Murray added: “China overtook Japan to become the most lucrative pay TV market in 2011. India will take second place from 2019. Together China, India and Japan will account for two-thirds of the region’s $46 billion pay TV revenues by 2020.”

Pay TV revenues will more than double in 10 countries (Bangladesh, India, Indonesia, Laos, Myanmar, Nepal, Pakistan, the Philippines, Thailand and Vietnam) between 2013 and 2020. However, revenues will fall in Hong Kong, and will increase by less than 10% in New Zealand, Singapore and South Korea.