According to new research from The Diffusion Group (TDG), despite the widening availability of ‘TV Everywhere’ services, tablet owners are significantly more likely to use OTT service apps such as Netflix than those offered by both TV networks and operators. Almost half (48%) of adult tablet owners report using OTT video apps on occasion, compared with 37% that use broadcast network apps, 31% that use cable network apps, and 23% that use TV operator apps.

The use of tablet apps for both free and fee-based online services is not only more widespread but occurs more frequently than the use of TV-specific apps. For example 41% of tablet users engage OTT service apps at least once a month, compared to 26% who use apps from the ‘Big Four’ broadcasters, 21% that use cable channel apps, and only 16% who turn to TV operator apps at least once a month. 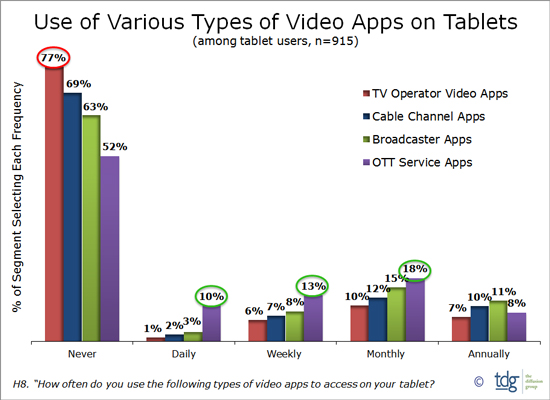 “Some 60% of adult broadband users now own a tablet such as iPad or Kindle Fire,” notes Michael Greeson, TDG President and Director of Research. “These portable platforms are rapidly becoming second televisions in the home, where three-fourths of tablet video viewing takes place. This is consistent with predictions TDG offered the very week the iPad was first introduced.”

Unlike computer video viewers historically inclined to search the open web for video, tablet users wasted no time in embracing video apps that arrived shortly after tablets were introduced. While apps from OTT services such as Netflix lead the pack, TV players are upping their game. The recent expansion of network and operator ‘TV Everywhere’ apps should help broaden their use, but uptake has to date been disappointing, especially those provided by TV operators like Time Warner Cable and DISH.

Despite the fact that most of the larger US TV providers now offer a robust collection of TV programs for viewing through service-specific apps, only 23% of tablet owners have used them during the past 12 months. Broadcast and cable network apps are faring better, used by 37% and 31% of tablet users respectively. As Greeson notes, “TV operators thus have their work cut out for them if they expect to keep tablet video viewers within their branded content corral.”

These insights are drawn from TDG’s most recent analysis of US adult broadband users, Benchmarking the Connected Consumer, which features 1,500 online interviews and covers a wide range of topics related to ownership and use of various Internet-enabled video platforms, including stand-alone and mobile/portable devices. For more information about this recent study, please contact [email protected]