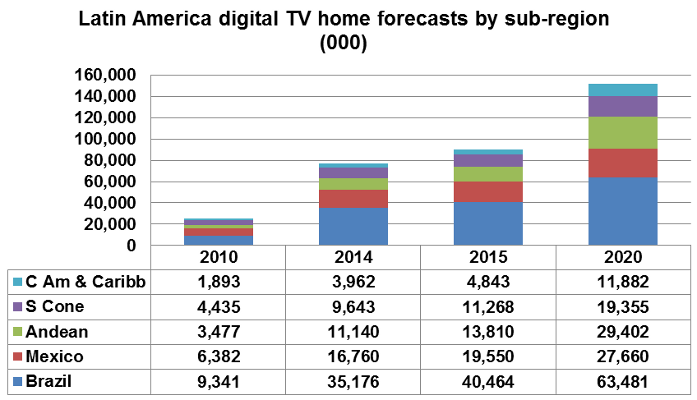 From the 19 countries covered in the forecasts, Brazil will add 28 million digital TV households during this time frame, with Mexico contributing an extra 11 million and Argentina nearly 5 million more. Puerto Rico was the first country to reach complete conversion to digital – in 2014. Panama and Uruguay will be the only other countries to reach complete digital conversion by 2020.

Nearly 10 million pay satellite TV households will be added between 2014 and 2020, taking penetration to a quarter of TV households by 2020. However, much of its fast growth has already taken place.

About 18.2 million digital cable subscribers to be added between 2014 and 2020; taking penetration to a fifth of TV households. Conversely, the number of analog cable subscribers will plummet from 18.0 million to 4.3 million. IPTV will climb from 1.3 million subscribers in 2014 to 6.8 million by 2020.