Despite the incessant gloomy economic and political news from the region, pay TV revenues in Eastern Europe will be 45% higher in 2020 ($7,269 million) than in 2010 ($5,029 million), according to Digital TV Research. However, the fifth edition of the Digital TV Eastern Europe Forecasts report states that increase will only be 17% between 2014 and 2020 – although this is still an increase of $1 billion. 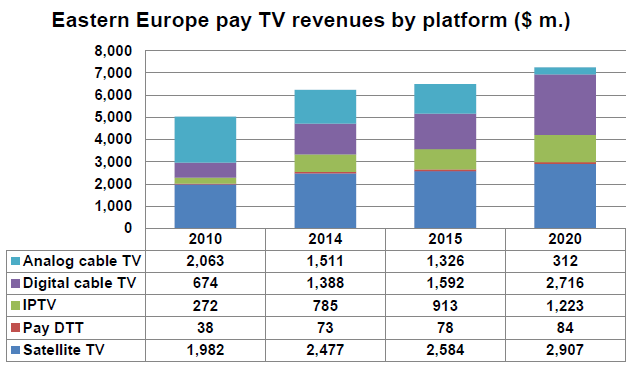 Simon Murray, Principal Analyst at Digital TV Research, said: “Pay TV analysis in Eastern Europe has long been distorted by the legacy of analog cable. Many homes traditionally received a limited number of channels for a very small fee over analog networks. These subscribers are rapidly converting – mostly to digital cable but also to IPTV, satellite TV and DTT.”

At the other end of the scale, Estonia and Slovenia will experience falling pay TV revenues between 2014 and 2020. Furthermore, Bosnia, Hungary, Latvia, Lithuania, Poland, Romania and Slovakia will grow by less than 5%.