LONDON — 2015 was the year of growth for the pay TV market in the Middle East and North Africa region, according to a new report from IHS Inc. (NYSE: IHS), the leading global source of critical information and insight.

The report, entitled Middle East and North Africa Pay TV Market Monitor, says the number of pay TV households jumped 10 percent in 2015 to 4.95 million. In the 13 countries covered by the annual report, revenues from pay TV passed the billion-euro mark for the first time. 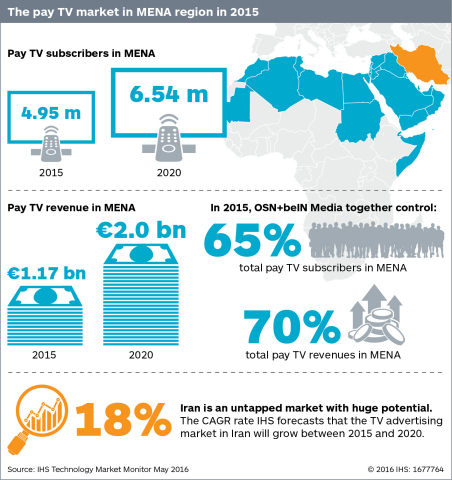 Revenues from primary households’ subscriptions grew 37 percent, from €852 million in 2014 to €1.17 billion in 2015, the report noted. “Pay TV in the Middle East and North Africa region is growing rapidly and faster than any other region we analyse,” said Constantinos Papavassilopoulos, senior analyst, IHS Technology.

IHS forecasts that pay TV subscribers will increase to 6.54 million by the end of 2020, up 32 percent on the end of 2015 and representing a CAGR of 6 percent over the five-year period.

IHS expects that the positive drive of the pay TV market will continue persistently for the next five years, with revenues almost doubling to just over €2 billion in that time frame. The growth will be due to the enhanced level of competition between the major operators, the introduction of TV Audience Ratings Systems in the Gulf States, the expansion of fibre networks, which facilitate the offering of premium pay TV services and the growth of the SVoD OTT services.

The opening of the Iranian TV market, a largely untapped market for pay TV business, is providing a wealth of opportunities for the regional operators. According to local data sources, 71 percent of TV household in Tehran are equipped with a satellite dish. But there are still barriers to be surpassed.
“The online-video market is very nascent,” Papavassilopoulos said. “IHS put broadband penetration at 56 percent of households at the end 2015. However, due to the Iranian government policy of regulating access to the Internet for its citizens, broadband speeds are lower than in neighboring Arab states. Content will also have to be carefully chosen to appeal to the Iranian audience. Simply repurposing content that was made for wider Arabic audiences will not work for Iran.”

There is optimism both inside Iran and internationally that the lifting of sanctions will put added pressure on the government to relieve some of these restrictions, according to the IHS report. IHS forecasts that TV advertising revenues can grow from $275 million in 2015 to $627 million in 2020 if the normalization of trade between Iran and the rest of the world continues. “The TV market would benefit hugely,” Papavassilopoulos said. “Our forecast figures would represent a healthy CAGR of 18 percent.”

All forecasts in IHS Technology – MENA Media & Telecoms Intelligence Service are conductedin-house based on historical and current data gathered first-hand directly from the companies concerned, and from trade bodies, regulatory authorities or government departments with which IHS Technology maintains a relationship. IHS does not rely on third-party sources for its reports. This approach provides a sound basis on which to develop IHS models, all of which are built company-by-company and technology-by-technology. Totals are then derived from the component parts and are thus wholly granular.