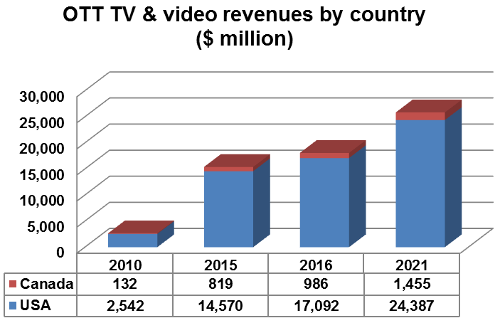 The North American SVOD sector is by far the most mature in the world, with 81.81 million SVOD subscribers [for movie and TV services only – excluding sports, for example] by end-2015. The SVOD total is forecast to climb to 109.59 million by 2021.

Simon Murray, report author and Principal Analyst at Digital TV Research, said: “It is important to stress that these figures are gross – some homes take more than one SVOD platform – especially in the US. We do not believe that 86% of US TV households or even 97% of US fixed broadband households will be SVOD subscribers by 2021. From the 101 million US total in 2021, we forecast that 25 million will be secondary SVOD subscriptions. Therefore, the average US SVOD user will pay for 1.33 subscriptions. Putting it another way, there will be 76 million US primary SVOD users by 2021.”

He continued: “We have included half of the Amazon Prime fee as an SVOD subscription to homes that we estimate take Amazon Video (about 70%), even though homes are not directly paying for Amazon Video.”

Online rentals will continue to suffer as SVOD grows. OTT TV and video rental revenues climbed from $708 million in 2010 to $2,022 million in 2014. However, revenues will fall from then on – to $1,744 million in 2021 as SVOD is seen as a more attractive substitute to rentals.