LONDON — Total spending on subscription video on demand (SVoD) in Western Europe broke the €2 billion mark in 2015 and is forecast to reach €3 billion by year-end 2016, according to a new report released today by IHS Markit (Nasdaq: INFO), a world leader in critical information, analytics and solutions.

Typical examples of SVoD players in Western Europe are Netflix and Sky’s NowTV, which deliver content over the open internet and is accessed via connected devices.

“The multi-territory international players changed the game dramatically for SVoD in Western Europe in a very short period of time,” said Tania Loeffler, analyst at IHS Technology. “When Netflix launched in the UK, total consumer spending on SVoD in Western Europe more than doubled to €307.6 million in 2012. By the end of 2014, that figure had more than trebled to €1.1 billion due to Netflix’s European expansion and the launch of Amazon Prime in the UK, Germany and Austria.” 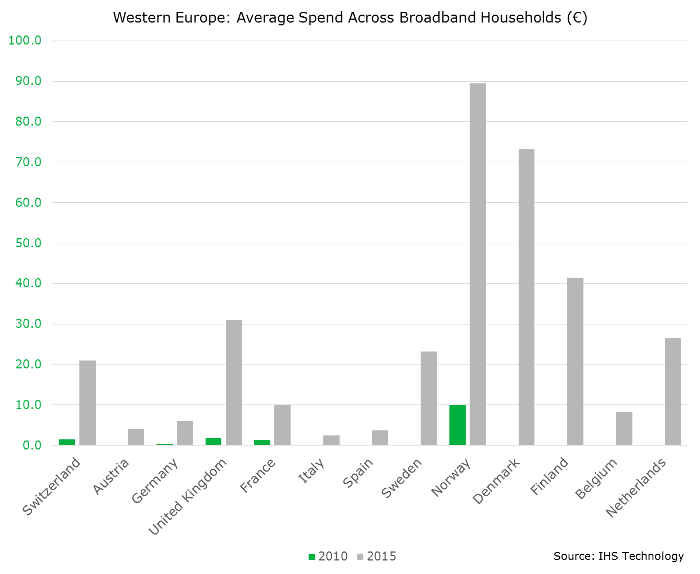 As existing services reach saturation in key markets, year-on-year growth in spending on online SVoD in Western Europe will slow into the forecast period (2016-2020), the report said. Nonetheless, even this slower increase in value generated from SVoD will be sufficient to make the platform the largest in terms of total home video spending. By 2018, IHS Technology forecasts SVoD will account for 49 percent (€4.2 billion) of home video spending in the region and is set to increase to a 58 percent share or €5.2 billion by 2020.

Smaller markets have out-performed their larger neighbours in terms of SVoD spending: Nordic countries (Sweden, Norway, Denmark and Finland), Belgium, the Netherlands, and Switzerland. “These smaller individual markets are relatively affluent, but they do generate disproportionately significant consumer spending from the much smaller populations from which they can draw SVoD subscribers,” Loeffler said.

In 2015, Sweden had 3.2 million broadband households and Norway had 2.1 million, compared to Germany’s 26.9 million. However, broadband households in Sweden spent an average of €23.16 on online SVoD services and the average spend in Norway was €89.46; German Broadband Households, in comparison, spent only an average of €6.06 on SVoD services during the same timeframe.

Norwegians are forecast to spend a total of €239.6 million on SVoD by year-end 2016, set to increase to €318.3 million by 2020, which will put it on par with both Spain and Italy (markets with approximately four times as many broadband households). By 2016, Belgium and the Netherlands combined will account for 10 percent of total SVoD spending in Western Europe.

The Nordics and Benelux both benefited from early Netflix launches and in many ways were primed for legitimate SVoD consumption. Nordic consumers have shown strong demand for online consumption of video content going back to 2006, while those in Benelux already had a strong tradition of both transactional and subscription TV-based Video on Demand. In both regions, digital subscription is a continuation of a long-established digital video consumer habit, which was supported early on by strong broadband infrastructure.

As 2016 will be the first full year of operations for Netflix in Spain and Italy, both will see stronger total market growth for SVoD compared to 2015, according to the IHS Technology report. Spending in Spain is forecast to increase by 124 percent to reach €59.9 million and Italy is forecast to reach €94.7 million, or 112 percent growth in 2015. By 2020, Spain and Italy will account for a combined 11 percent of total SVoD spending in Western Europe.

UK stands alone at the top

The UK will remain the standout market in terms of consumer spending on SVoD in Western Europe. The country is forecast to generate over €1.0 billion by year-end 2017 and will retain a consistent 35 percent share of total SVoD market spending through to 2020.