Audiovisual media revenues in Germany to pass €11bn this year

VPRT Forecast for the German Media Market in 2016

BERLIN — This year, Germany’s audiovisual media will for the first time generate more than 11 billion euros in revenue. Across all the industry’s market segments (radio and audio, as well as TV and video), the Association of Commercial Broadcasters and Audiovisual Services in Germany (VPRT) is forecasting revenue growth of 6.2 percent or 650 million euros, to reach a total of 11.1 billion euros. This is the conclusion reached by the annual market forecast prepared by VPRT which was presented today by the Association ahead of the Medientage München. In 2015, revenue generated by the audiovisual media rose by 730 million euros (+ 7.5 percent) to 10.4 billion euros. As a result, the 10 billion euro mark was topped for the first time last year, this again being significantly higher than the 5.5 percent growth last estimated by the VPRT in its autumn forecast for 2015. 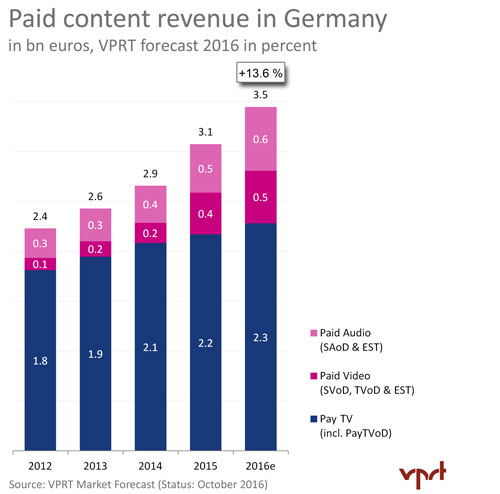 Hans Demmel, Managing Director of n-tv and Chairman of the Board at VPRT, said: “Audiovisual media meanwhile rank among the most important growth and innovation drivers in the German economy and we still see exceptionally good market prospects in the AV sector in the years to come. The degree to which the added value potential can however be realised in Europe depends to a great extent on the creation of a fair regulatory framework for domestic market players in a competitive international market environment.”

The VPRT sees a particularly urgent need for political action in terms of creating a convergent regulatory framework, equal competitive conditions vis-à-vis the “global giants”, for instance in the case of advertising, ensuring access to and the findability of offerings on platforms, as well as innovation-friendly data protection regulations and effective content protection.

Frank Giersberg, Member of the Board of Directors responsible for Market and Business Development at VPRT, said: “Revenue generated by the audiovisual media topped the 10 million euro mark for the first time last year. For the current year, we are expecting more than 11 billion euros with sustained growth across all segments, the largest increase in absolute terms being in the sector of linear offerings and the highest percentage growth among on-demand offerings.”

Growth also continues in the teleshopping segment where VPRT is expecting a 3 percent increase in revenue to reach approx. 1.9 billion euros.

Audiovisual media revenues* in Germany
Forecast net revenue in €bn, changes in% and in €m

* Net revenue generated by all providers across the entire German market;
** Including commercial and public service providers;
*** Including international players;
**** Not yet included under “Audiovisual Advertising”: in-game, cinema and audiovisual outdoor advertising;
***** Not yet included under “Audiovisual Media” is other revenue generated by audiovisual media enterprises (e.g. from rights trading or licences) or fee income on the part of public service broadcasters. Nor has account been taken of revenue generated at upstream or downstream stages of the value chain (producers, networks, platforms, devices, agencies, service providers etc).