On the Path to Growth – for the first time, pay TV and video services generate 3 billion euros

BERLIN/MUNICH — Pay TV is continuing along its growth path, achieving new record figures across German-speaking territories. A further increase in the demand for pay-TV and paid-video-on-demand offerings is also expected for 2017. These are the key results of the market analysis “Pay TV in Germany 2017”, which was presented today in Munich by the Pay-TV Working Group at the Association of Commercial Broadcasters and Audiovisual Services in Germany (VPRT). 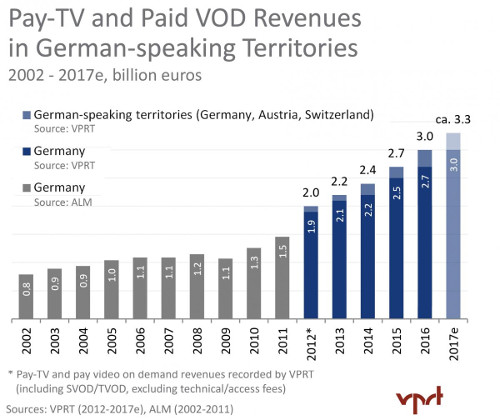 The number of pay-TV subscribers rose to some 7.6 million in Germany during 2016 (2015: 7.3 million) and to around 8.4 million across the German-speaking territories. For 2017, a further increase of 7.9 million subscribers is forecast for Germany and 8.7 million for the German-speaking area. The average monthly reach recorded for pay-TV programmes in Germany already amounted to 13.1 million in 2016 (2015: 11,7 million), with as many as 15.8 million viewers per month meanwhile being reported for the first half 2017.

Frank Giersberg, Member of the Board of Directors, Market and Business Development at VPRT: “Last year, revenue generated by pay TV and video services exceeded the 3-billion-euro mark across the German-speaking territories. This represents growth of 50 percent compared with 2012. And in 2017, the market continues to grow further.” 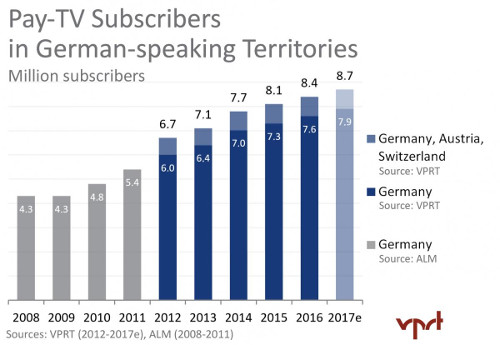 Hannes Heyelmann, Managing Director, Central and Eastern Europe and International Programming Strategy at Turner: “Part of the reason why Pay TV continues to grow in Germany is because it fulfils the consumers desire to be able to choose whether to watch content linear or non-linear, live or on-demand. Another reason is an increased offering of relevant exclusive local content. At Turner we are a driving force behind that development and remain committed to invest in fact we will even increase our investment level by spending more than 10 million euros on German local productions over the next few months.”

The number of pay-TV programmes that can be subscribed to in Germany currently amounts to 103 channels, including 10 children´s programmes, 15 music stations, 16 documentary channels, 19 sports channels and 43 entertainment programmes. During presentation of this year´s survey, the sports sector, which in terms of programme numbers is the second-largest pay-TV segment, was considered in more detail.

Wolfgang Elsässer, SVP Business Unit TV, Telekom Deutschland: “With its EntertainTV, Deutsche Telekom has the fastest-growing TV platform on the German market. We believe that, based on exclusive content, we can boost this growth even further, whereby sports offerings, together with fictional content, play a vital role, especially in terms of acquiring new customers. We also aim to consistently pursue this path in the future.”

Dr. Holger Ensslin, Chief Officer Legal, Regulatory & Distribution at Sky Deutschland and General Manager of Sky Österreich GmbH: “The most recent tender processes for major sports rights, such as the UEFA Champions League and the Handball Bundesliga, along with the realisation of high-quality in-house fictional programmes offering German content, e.g. ‘Babylon Berlin’ or “Das Boot”, clearly show the development undergone by Sky and the entire pay-TV market in Germany over the past few years. The distribution platforms and marketing models through which this content can be accessed are as varied as the content itself. In the course of a highly intense competition for content and new customers, Sky Deutschland has not only stood its ground, but is continually growing. A trend that is representative of the entire pay-TV segment in Germany and that is strengthening the industry as a whole.”

Susanne Aigner-Drews, Country Manager Germany/Austria/Switzerland, Discovery Communications Germany: “The number of playout options for pay TV is larger and more attractive than ever before and opens up exciting and varied opportunities for market players and consumers, also in the future. This is of great significance, notably for the sports sector, for sports fans will benefit by being able to consume their favourite types of sport on all devices, at any time and in a mobile form. By promoting our Eurosport Player as a platform for premium sports content, we aim to play an active part in shaping this trend towards more diversity and in this way, generate considerable added value for users.”

Dr. Matthias Kirschenhofer, Managing Director of Sport1 Media: “The growing pay TV-market and customers´ immense interest in sports make our two pay TV channels, SPORT1+ and SPORT1 US, a key pillar in terms of our positioning as Germany´s leading 360° sports platform. Ongoing diversification of our distribution channels is one of our focal tasks, allowing viewers to enjoy our pay TV stations on many platforms.”