BERLIN — Pay-TV continues to record ongoing expansion in Germany. In 2014, new record figures were reached in terms of revenues, subscribers and viewing times. Sustained growth momentum has also been recorded during the first half of 2015. Based on the survey “Pay-TV in Germany 2015” carried out by the Association of Commercial Broadcasters and Audiovisual Services in Germany (VPRT) and presented today at a press conference in Munich, revenue from pay-TV and pay video on demand rose by some eight percent in Germany, from 2.05 billion in 2013 to 2.22 billion euros in 2014. In the German-speaking territories, pay-TV and pay VOD revenue amounted to around 2.4 billion euros. VPRT is forecasting a further rise in revenue of some seven percent for 2015 to just under 2.4 billion euros in Germany and approximately 2.6 billion euros in the German-speaking countries. This rise in revenue is based on a significant growth in the number of subscribers registered by pay-TV channels and platforms, which is raising the availability of pay-TV in German households. In 2014, subscriptions increased by almost 10 percent in Germany to reach 7 million and around 7.7 million across the entire German-speaking area. For 2015, VPRT is forecasting further growth in the number of subscribers in Germany, with pay-TV penetration reaching over 20 percent of all households for the first time. 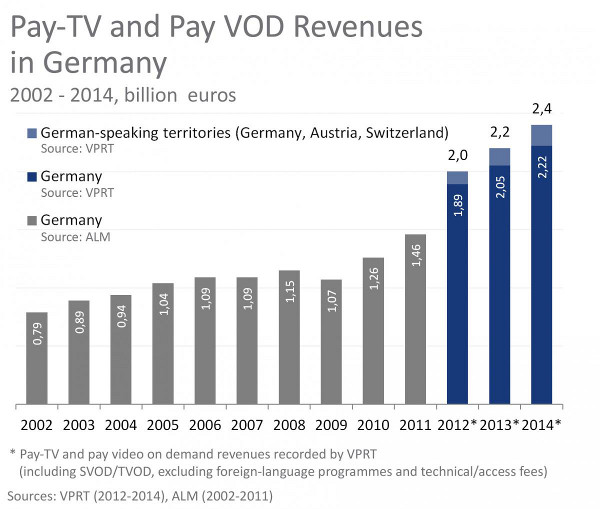 This is also reflected in the actual viewing time devoted to pay-TV programmes. During the first half of 2015, the average monthly reach for those pay-TV channels licensed by the Working Group for Television Research (AGF) already amounted to 11.6 million viewers compared with some 10 million over the same period in 2014. In pay-TV households, the average monthly audience share reached 16.8 percent. Across all households, i.e. including households without any pay-TV subscriptions, the average audience share amounted to 2.7 percent during the first half of this year, compared with 2.2 percent over the same period last year. 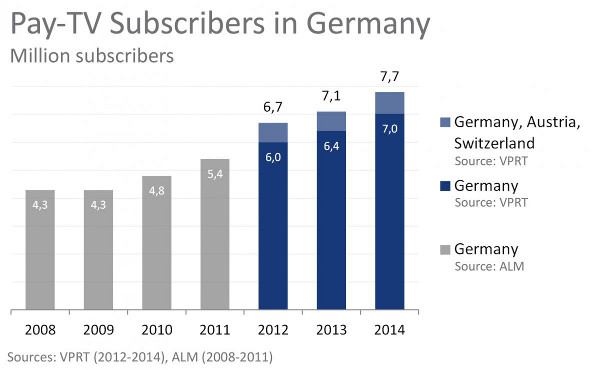 Subscriptions to 90 pay-TV programmes are currently available in Germany, 40 of these in the entertainment genre, followed by the genres of sport (15), documen-taries (15), music (10) and children´s programmes (10). They offer high-quality pro-ductions in all genres, including numerous TV premieres and undubbed versions in top picture and sound quality, both live and on-demand. According to the VPRT survey, more than 1 billion euros were invested in programmes during 2014, an increasing amount of this in in-house productions.

Frank Giersberg, Member of the Board of Directors and responsible for Market and Business Development at VPRT “The pay-TV boom is continuing. Pay-TV remains the fastest-growing TV segment, both in Germany and across the entire German-speaking area. Over the next few years, we anticipate sustained momen-tum in the pay-TV and pay VOD segment. At the same time, we also see further growth in the sector of TV and video advertising, a trend from which both free-TV and pay-TV providers will benefit.”