Airbus completes construction of EUTELSAT 172B 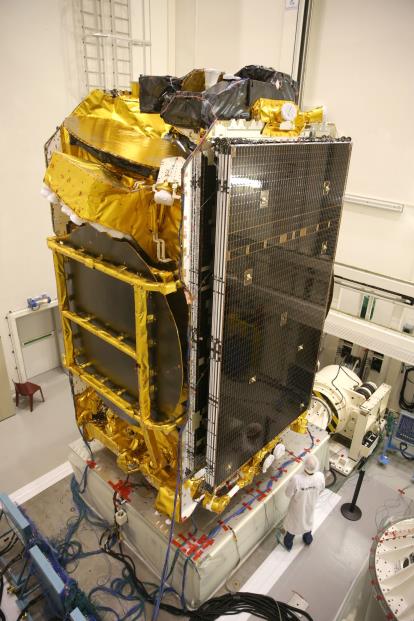 TOULOUSE — Construction of EUTELSAT 172B, the first high-power all-electric telecommunications satellite built in Europe, is now complete at the Airbus satellite assembly facilities in Toulouse. The fully fledged satellite for Eutelsat is now undergoing final testing before it is sent to Kourou, French Guiana, for an Ariane 5 launch scheduled in April.

EUTELSAT 172B breaks now ground as the first high-power satellite in the 3 tonne class. The satellite combines electric power of 13 kW with a launch weight of only 3,500 kg. This highly innovative satellite will host three distinct payloads that will strengthen Eutelsat’s capability to serving Asia-Pacific markets: a C-band payload, a regular Ku-band payload and a high throughput payload specifically designed for in-flight connectivity along Pacific air corridors.

EUTELSAT 172B is based on the highly reliable Eurostar E3000 platform from Airbus Defence and Space, in its latest EOR (Electric Orbit Raising) evolution. This version relies exclusively on electric propulsion for initial orbit raising and all on-station manoeuvres, with the consequent reduction in mass enabling the satellite to be launched in the Ariane 5 lower position, resulting in lower launch costs.