Unlike most of the rest of the world, the Asia Pacific pay TV sector is vibrant, with subscribers and revenues forecast to rise over the next five years. 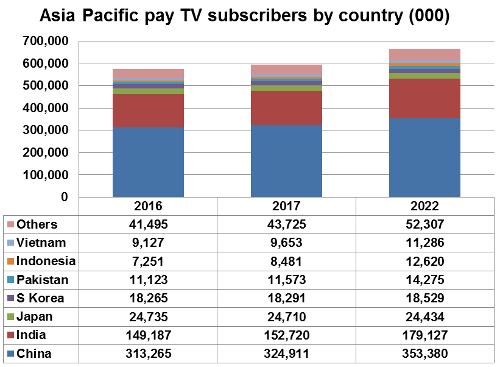 Digital cable will supply 72 million of the 92 million pay TV subscriber additions between 2016 and 2022. However analog cable subscriptions will fall by 70 million – leaving cable nearly flat overall. IPTV will contribute in an extra 57 million subs, with pay satellite TV up by 32 million.

Together China, India and Japan will account for more than two-thirds of the region’s $40.13 billion pay TV revenues by 2022.

Pay TV revenue will increase by $5.75 billion between 2016 and 2022. India will contribute $3.25 billion to the additional revenues, with China bringing in $1.10 billion more. Pay TV revenues will double in Bangladesh and Myanmar, but will fall in six other countries.

China Radio and TV will gain 19.97 million digital cable subscribers between 2016 and 2022. However, the operator will lose 20.50 million analog cable subs; giving a net loss of 531,000 subs. The next biggest loser will be Japan’s SkyPerfecTV; down by 289,000 subscribers over the same period.

IPTV operators China Telecom (plus 24.39 million) and BesTV (plus 12.19 million) will gain the most pay TV subscribers over the same period, followed by India’s Dish TV (plus 5.20 million).
China Radio & TV will remain the region’s dominant pay TV operator in revenue terms by a massive distance. However, its revenues will fall by $763 million between 2016 and 2022. Meanwhile, China Telecom will gain more than $1 billion and BesTV will climb by $608 million.