Revenues lost to online piracy will nearly double between 2016 and 2022 to $51.6 billion, according to the Online TV Piracy Forecasts report. Covering 138 countries, these forecasts include revenues lost to TV episodes and movies – but not other sectors such as sports or pay TV. 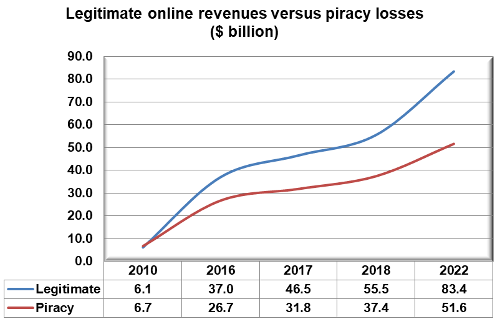 Simon Murray, Principal Analyst at Digital TV Research, said: “Piracy will never be eradicated. However, it is not all bad news. Piracy growth rates will decelerate as more effective government action is taken and as the benefits of legal choices become more apparent.”

He continued: “Legitimate revenues from OTT TV episodes and movie overtook online piracy losses as far back as 2013. The gap between the two measures is widening.”

Asia Pacific will become the largest region for online piracy in 2018 – overtaking North America. Asia Pacific’s piracy losses will double between 2016 and 2022 to nearly $20 billion.

Online TV piracy is spreading worldwide. The top five countries represented 63% of the 2016 total, but this proportion will fall to 55% by 2022. Eight countries will record revenue losses of more than $1 billion in 2022 – double the 2016 count.

China has taken measures to combat piracy, but it is still a major problem. Its revenue losses will climb by $5.5 billion between 2016 and 2022 to $9.8 billion. However, China’s gap between legitimate revenues versus piracy losses will improve from a deficit of $1.2 billion in 2016 to a surplus of $2.4 billion in 2022.

The problem will not be dealt with as effectively elsewhere. India will climb from eighth in the 2016 rankings ($700 million losses) to third in 2022 ($3.1 billion losses). Brazil will add $1.1 billion in losses over the same period.