Digital TV Research forecasts 9.99 million SVOD subscribers across 35 Sub-Saharan Africa countries by 2023, up from 1.56 million at end-2017. Although massive growth will take place, the Sub-Saharan Africa OTT TV & Video Forecasts report estimates that SVOD revenues will only be $775 million by 2023 as some platforms are very cheap. 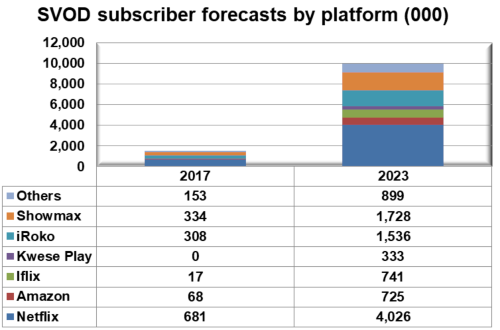 The top six platforms accounted for 90% of the region’s SVOD subscribers by end-2017, with this proportion to be retained throughout the forecast period. Despite being relatively expensive, Netflix will account for 40% of the 2023 total (4.03 million subscribers).

Simon Murray, Principal Analyst at Digital TV Research, said: “Market dynamics have shifted over the last year. There have been many fewer platform launches, especially on a country level. Furthermore, several multinational players are expected to rein in their ambitions whereas Netflix has consolidated its market leadership.”

Murray continued: “We believe that iRoko will concentrate mostly on West Africa. A significant stake in Iflix was sold to Econet, which we believe will mean more focus on Eastern and Southern Africa. Multichoice announced that Showmax will be given free to premium DStv subscribers across Africa, with Compact subscribers offered Showmax for half price.”