From the 20 countries covered in the Middle East & North Africa OTT TV & Video Forecasts report, Turkey will remain the leader by some distance, with 6.72 million subscribers by 2023 – or a third of the region’s total. 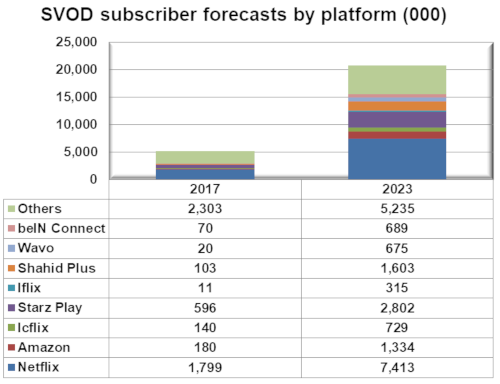 Simon Murray, Principal Analyst at Digital TV Research, said: “Netflix is dominant across the MENA region. This is partly because it operates in more territories than its Arabic competitors – it has significant subs bases in Israel and Turkey. However, its success is down to more than geographic reach. The global appeal of its original content has spread throughout the region.”

From its regional total of 7.41 million, Netflix will have 3.57 million subscribers in Arabic-speaking countries by 2023. This is higher than its nearest rival Starz Play (2.80 million).

The top eight multinational platforms (Netflix, Amazon Prime Video, Icflix, Starz Play, Iflix, Wavo, beIN Connect and Shahid Plus) will account for three-quarters of the region’s SVOD subscribers by end-2023, up from 56% in 2017. Extracting Israel and Turkey, these eight platforms will retain 91% of SVOD subscribers.

Murray continued: “Although overall subscriber numbers will climb impressively, there are just too many Arabic platforms. They do not offer enough original or exclusive content to seriously challenge Netflix. We do not believe that the market can sustain this many Arabic platforms in the long run. Our report only covers paying SVOD subscribers – not those receiving free platforms as part of their pay TV subscription.”