The Eastern Europe OTT TV and Video Forecasts report estimates that Russia became the SVOD subscription [an SVOD subscriber can have more than one subscription] market leader in 2018, by overtaking Poland. However, it will take until 2023 for Russia to generate greater SVOD revenues than Poland as its subscribers pay lower fees. 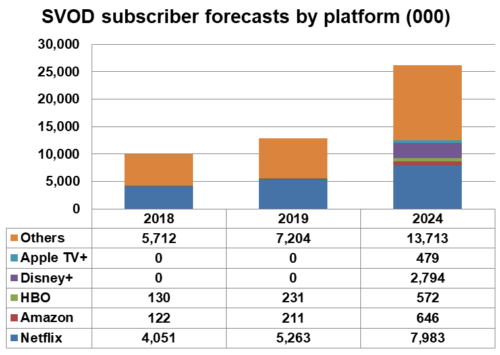 Digital TV Research forecasts that Netflix will have 8 million subscribers across 22 Eastern European countries by 2024, double its 2018 result and representing 30% of the regional total.

Simon Murray, Principal Analyst at Digital TV Research, said: “The imminent launches of both Disney+ and Apple TV+ will further boost the sector. We forecast nearly 3 million subscribers for Disney+ by 2024. Apple TV+ will be more modest.”

Murray continued: “We believe that Netflix will thrive despite these rival launches. However, we have downgraded our Amazon Prime Video forecasts. There are no Amazon Prime countries in Eastern Europe at present, so all of its subscribers will be directly paying for the platform.”

These international players will grow despite not making much of an impact in Russia. The Russian regulator introduced a 20% foreign ownership equity limit on OTT platforms. Amediateka brands itself “home of HBO”, so deals with Russian platforms are possible.

Poland will remain Netflix’s top country, with nearly 2 million subs – or a quarter of its regional total – by 2024. Poland, Romania and Russia will account for half its subscriber base by 2024.