The total telecom and pay-TV services revenue in India is poised to grow at a compound annual growth rate (CAGR) of 6.8% during 2019-2024, driven by growth in mobile data, mobile voice and fixed broadband segments, according to GlobalData, a leading data and analytics company.

GlobalData’s ‘India Telecom Operators Country Intelligence Report’ states that mobile voice will be the largest revenue contributor to the overall market during the outlook period. 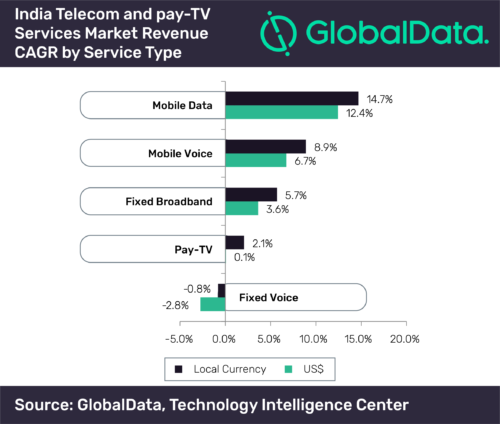 However, revenues from mobile data segment are forecast to grow at the fastest CAGR of 13.2%, driven by rising mobile Internet subscriptions due to improving mobile network coverage in rural areas and increasing mobile data average revenue per user (ARPU) with growing adoption of higher-priced 4G services.

According to the report, smartphones’ share in total handset subscriptions will increase from 45.6% in 2019 to an estimated 76.6% by 2024, on account of the proliferation of low-cost smartphones in the market along with discount offers by mobile network operators (MNOs).

Fixed broadband revenue is set to grow at a CAGR of 3.6% to reach US$4.3bn by 2024-end, primarily driven by a steady rise in fiber-to-the-home (FTTH) connections, supported by the Government’s initiative to provide 50Mbps broadband connectivity to the entire population by 2022, along with ongoing fiber deployments by telcos such as Jio.

Though the country will witness steady growth in cable and direct-to-Home (DTH) subscriptions and robust growth in the adoption of Internet Protocol television (IPTV) subscriptions, declining ARPU will decelerate the growth of overall pay-TV revenues.

Dhingra concludes: “Reliance Jio’s foray into the fixed broadband and pay-TV markets in September 2019 will disrupt the market as the telco aims to compete with established players with the low-cost packages and promotional offers.”