Western Europe to gain over 100 million SVOD subscribers by 2025

Western Europe will have 191 million SVOD subscriptions by 2025; more than double from 90 million at end-2019. About 35 million subscribers will be added in 2020 alone, with the Covid lockdown having a major effect. 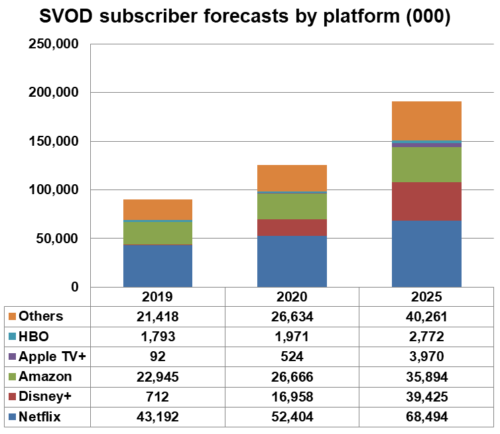 Netflix will remain the largest platform, with 68.49 million paying subscribers expected by 2025. Despite adding 25 million subs between 2019 and 2025, Netflix will lose market share.

Disney+ has made a strong and immediate impact, given its brand recognition, low price and impressive content line-up. Disney+ launched in the remainder of Western European countries this month.

Simon Murray, Principal Analyst at Digital TV Research, said: “Disney+ will have a huge impact. However, we have downgraded Disney+ since our last forecasts in April. After strong early take-up and based on its June results, subscriber growth will decelerate rapidly. We have increased our forecasts for the ‘other’ category due to the wave of launches due from the likes of Hulu, Paramount+ and Peacock.”