The market for pay TV and paid video continues to show highly-dynamic growth. VAUNET, the leading association for commercial audiovisual media in Germany, has documented this development in its publication “Pay TV and Paid VoD in Germany 2020/2021”, which was presented today in Berlin. 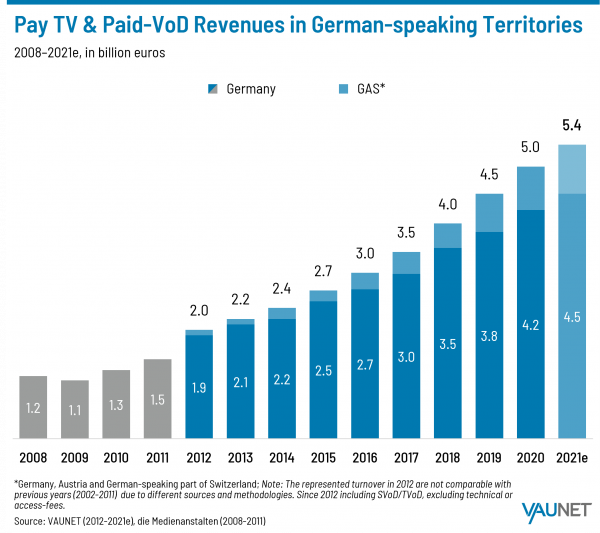 With a stable basis of some 8 million pay TV subscribers, pay TV programmes licensed by the AGF (Television Research Group) reached more than 20 million pay TV viewers for the first time in Germany during December 2020. Throughout 2020, an average reach of 17.4 million pay TV viewers per month was reported, representing an increase of 200,000 viewers compared with 2019. Across the whole of Germany, the number of SVoD subscribers amounted to 17.5 million in 2020 and should, according to the forecast, top the 20-million mark for the first time during the current year. 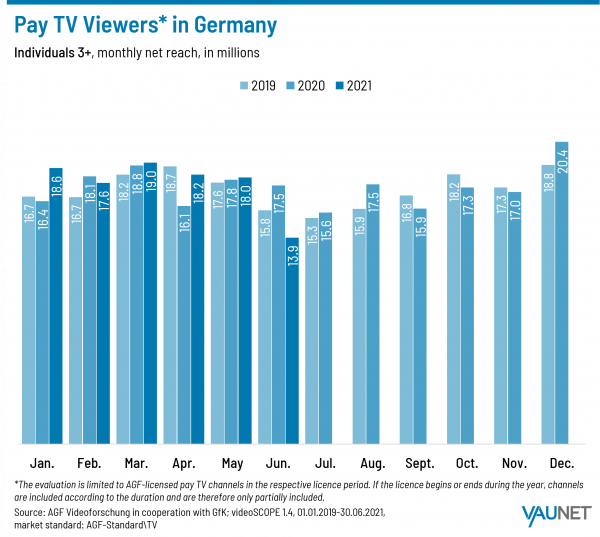 Frank Giersberg, Managing Director of VAUNET: “The revenues from pay TV and paid video on demand have risen continually over the past ten years, from 2 billion in 2012 to more than 4 billion euros today. Even during the years 2020 and 2021 which have been dominated by the coronavirus pandemic, this trend has been maintained. The growth drivers are video-on-demand offerings to which more and more people are subscribing and in many cases using to supplement pay TV.”

Tim Werner, Chief Executive Officer of Mainstream Media and Chairman of the Working Group for Pay TV at VAUNET: “We are currently all living in challenging times. In view of this, I am extremely pleased that our industry continues to perform so well. The 102 pay TV programmes, the major part of which are organised in VAUNET´s Pay TV Working Group, offer an impressive range across all genres. The channel brands are backed by both large and small, local and also global players. It is this diverse programme offering that is shaping pay TV´s positive market performance. This also applies in the case of Mainstream Media AG. Looking back over the past twelve months, the notable increase in both market shares and the net reach of Romance TV is particularly gratifying for us. We have a similar situation with our Heimatkanal, which, in the twenty-fifth year following its launch, is also recording a rise in net reach.” 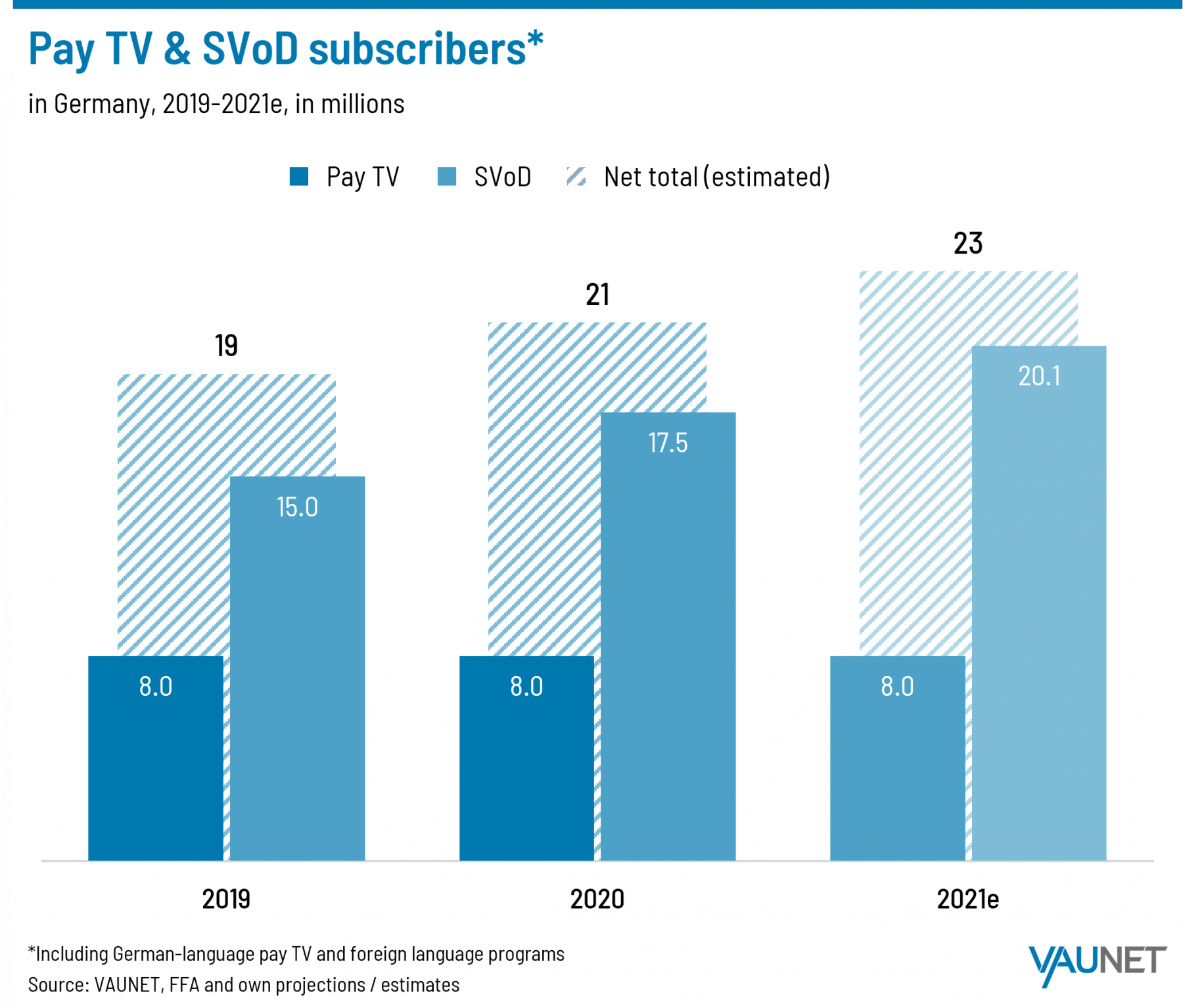 Elke Walthelm, Executive Vice President Content, Sky Deutschland and Managing Director of NBC Universal Global Networks Deutschland: ” Unique content is more in demand than ever before and willingness to spend money on valuable content is constantly increasing. Our plans to further exploit this potential are ambitious: we will expand Sky’s local and international original productions, along with massive group-wide investments, and we will keep pushing the development of our film and entertainment offering, for instance with the upcoming launch of ‘Sky Documentaries’ and ‘Sky Nature’. In addition, key to success will be an intelligent aggregation strategy, which conveniently bundles all relevant content offered by various providers and makes ‘content discovery’ easy. This is exactly what we’re focusing on with Sky Q.”

Nicole Agudo Berbel, Chief Executive and Chief Distribution Officer, Seven.One Entertainment Group: “The demand for video content has never been as high as today. This applies to both the linear TV channels and our on-demand content on Joyn. And also the pay TV content offered on ProSieben FUN, SAT.1 emotions and Kabel Eins Classics has been used by our viewers more than ever before. In addition to investing in attractive content, we have also recently expanded the technical reach of our pay TV channels. I am delighted that, thanks to a new agreement with Disney, we can now show the local premiere of the latest season of “The Walking Dead” on linear TV via ProSieben FUN in August, shortly after its US launch. And “American Horror Story” can also be viewed with us this year. This underscores our claim of always offering viewers first-class entertainment.”

Henning Nieslony, Co-Managing Director TVNOW, RTL Media Group Deutschland: “The market for video content continues to report rapid growth. TVNOW is one of the fastest growing providers on the German market, having established itself among the top group of the largest offerings. Now the streaming market is entering the next level and we aim to play an active part in shaping this. Which is why we are combining our forces under the RTL brand in order to strengthen awareness of RTL as Germany´s leading entertainment brand. As part of this venture, TVNOW will become RTL+ at the end of the year. The plus stands for an even larger offering of and with Germany´s greatest talents – since we aim to provide them with the most attractive home.”

Hannes Heyelmann, Executive Vice President Programming Europe, Middle East and Africa at WarnerMedia: “The rise in the use of pay TV and paid VoD and also people´s greater willingness to pay for premium-quality productions confirm the demand for first-class content and unusual stories. This is clearly evident from the performance of our three TNT channels. All three were able to record an increase in their core target groups during the first half of 2021. TNT Film in particular stands out in this regard and has not only achieved the best six months since the channel was launched, but it was also the most successful channel (apart from sports) in pay TV 14-49, closely followed by TNT Comedy in third and TNT Serie in sixth place.”