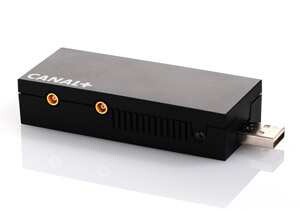 PARIS — DiBcom, the leading provider of Mobile TV solutions, is pleased to announce its involvement in the design of the CANAL+ KEY, the first USB key-sized Digital Terrestrial Television (DTT) HD decoder in the world. The device enables the reception of French pay-TV programmes (standard and High-Definition – HD) on PCs anywhere and at any given time.

This unique collaboration between DiBcom, CANAL+, France’s leading provider of premium pay television channels, and a couple of other renowned expert partners, has resulted in the CANAL+ KEY. A full DTT pay TV decoder embedded in a USB Key that offers French subscribers the possibility of receiving CANAL+ television channels (including the premium channel CANAL+ HD), the 18 free DTT channels, as well as other HD and local channels.

While developing the product, it was crucial for DiBcom to find a means of integrating a double receiver within an extremely limited space, and at the same time, respect the power consumption limits of the PC USB interface. The double receiver functions in two different modes: either in PVR mode (recording one programme while enabling the viewer to simultaneously watch another), or in antenna diversity mode which boosts reception in zones where coverage is poor. With this CANAL+ Key equipped with two small antennas and connected via USB to a laptop, users are no longer dependent on a roof antenna. This major innovation means increased freedom for viewers who wish to make the most of the CANAL+ Group’s exclusive multi-channel offer, either on an additional screen, or while on the move. For the first time, the quality and diversity of the DTT offer for both paying and free channels is not restricted to the home but is pocket-sized and can be appreciated at any given moment, during weekend trips or on holidays.

“Thanks to the vast experience we have acquired in the development of accessories for the reception of DTT on PC’s, the DiBcom team was able to quickly design and produce a solution that met the requirements set out by Canal+, and that are perfectly compatible with their descrambling and data protection modules”, says Yannick Levy, CEO of DiBcom.