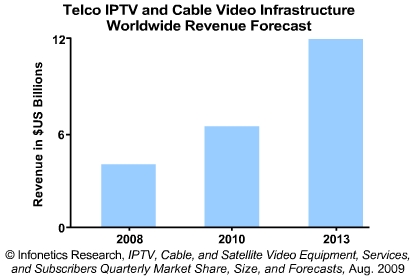 “Slow but steady IPTV and cable video subscriber growth in North America, Europe, and Asia, led by AT&T, Verizon, Belgacom, Swisscom, Telus, and KPN, helped boost the equipment market in the second quarter, particularly IP set-top boxes, middleware, and video content security software. Another significant development this quarter was the US Court of Appeals strike-down of the FCC rule limiting cable video providers from owning more than 30% of the video subscription market. This could pave the way for Comcast to pass the 30% threshold via a merger or acquisition. In a year where growth is hard to come by and corporate valuations are low, we think there could be significant M&A activity in North America in the second half of 2009,” predicts Jeff Heynen, Infonetics Research’s directing analyst for broadband and video.