IPTV now in more than 40% of French households

France’s Conseil supérieur de l’audiovisuel (CSA) has announced the publication of the results of its audiovisual household equipment survey for the second half of 2013.

In France, DTT remains the most popular form of television reception being present in 57.9% of households, though this is down 1.8 precentage points versus the first half of 2013.

TV-over-ADSL continues to grow, though at a slower pace, with 40.7% of households receiving TV this way. Satellite TV is present in a quarter of households and cable TV in 8.4%.

TV reception by technology in France (share of TV households) 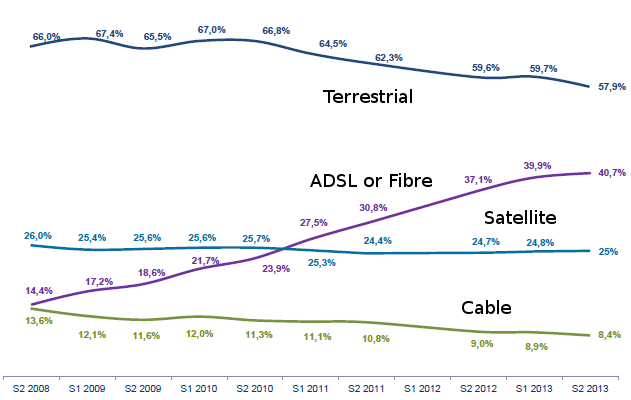 DTT HD reception equipment is present in 77.2% of all households, unchanged versus the second quarter of 2013. In terrestrial-only households penetration is slightly higher at 77.9%.

Reception on smartphones and tablets grew fastest. At the end of 2013, 28.7% of households had at least one touch screen device, and 55.9% of people over 15 years old have a smartphone.