The arrival of NOW TV to Chromecast offers customers another new way to enjoy the latest blockbuster movies, live action from all Sky Sports channels and must-see shows on 13 of the best pay TV channels from NOW TV all up on their main TV screen.

Furthermore, from today all NOW TV customers with the Entertainment Month Pass will also be able to watch ITV Encore. The new channel will bring episodes of Poirot, Prey, The Widower and Monroe to customers as it launches, with series 2 of Mr. Selfridge, series 4 of Vera and the fourth and final series of Whitechapel all joining later this month. 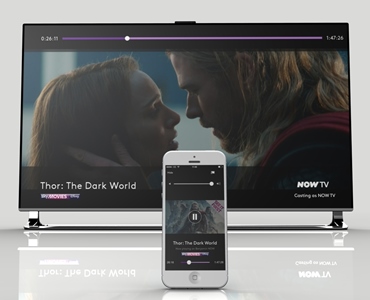 “We’re getting ready for the colder, darker nights and making sure there’s plenty of great TV to watch while snuggled down on the sofa. Adding the very best of British drama from ITV Encore means TV addicts won’t be short of shows to enjoy this autumn.”

Martin Goswami, Director of Pay & Distribution at ITV, said: “Following the launch of ITV Encore to Sky customers on 9th June 2014, we are delighted to also offer NOW TV customers the chance to enjoy our fantastic dramas with the addition of the channel’s catch up content to the NOW TV Entertainment Month Pass.”

Chromecast plugs into the HDMI® port on a TV. Set it up with a simple mobile app, then send online shows, movies, music and more to the TV using a smartphone, tablet or laptop. It works on Android and iOS devices, as well as Macs, Windows PCs and Chromebooks, and users can enjoy content from Google Play Movies, Google Play Music and YouTube as well as hundreds of other apps.

NOW TV customers with an Entertainment Month Pass can look forward to the latest shows around in September, including the finale series of Boardwalk Empire (Sky Atlantic), Geordie Shore (MTV), A League of Their Own (Sky 1), The Leftovers (Sky Atlantic) as well as the continuing series of Scandal (Sky Living). Plus, see the complete seasons of Prison Break, and The West Wing all for just £4.99 a month.

Movie fans can enjoy over 800 movies with their Sky Movies Month Pass, from big Hollywood blockbusters to cult classics and top independent films, for just £8.99 a month after a 30 day free trial. Customers get unlimited access to the latest films including Gravity, Anchorman 2: The Legend Continues, The Purge and Turbo with Emperor, Wish You Were Here and Philomena joining later in September.

Sports fans can keep up with the biggest matches and events with a Sky Sports Day Pass or Sky Sports Week Pass. Watch live action from all 7 Sky Sports channels for just £6.99 for 24 hours or £10.99 for a week’s worth of Sky Sports. The passes will give you more of the games that matter from the Barclays Premier League, UEFA Champions League, European Qualifiers, La Liga and Eredivisie as well as Formula 1™ and major tennis from the US Open. Plus Sky Sports 4 will become Sky Sports Ryder Cup for two weeks from 18th September as the tournament gets under way.