BANGALORE — The Set-Top-Box market in the South Asian Association for Regional Cooperation (SAARC) region has registered record growth in third quarter of 2015, as rapid digitization in the phase 3 cities of India is driving the demand for STBs. 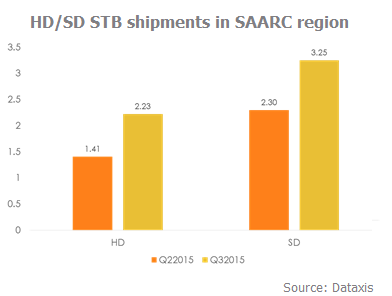 With the pay-tv industry in all major SAARC countries moving toward digitization—mandatory or voluntary—STBs of all kind from SD to HDTV and hybrid boxes are witnessing steady and robust growth.

According to new research report from Dataxis, “The STB Market in SAARC countries (Bangladesh, Nepal, India, Pakistan and Sri Lanka)-Q32015”, STB shipments to SAARC countries have witnessed 73% quarter-on-quarter growth during the Q3 2015. In the quarter under consideration, 7.34 million STBs were shipped in the SAARC region with an estimated value of USD176 million.

India leads the STB shipments for the period, accounting for about 97% of the total shipments to the SAARC region in the September ended quarter of 2015, according to the Dataxis analysis.

Skyworth tops the STB shipments to SAARC in the Q3 2015. The company reportedly has plans to locally manufacture STBs for the Indian market.

Local manufacturing in India, which accounted for just 5% of total STBs sold during the first and second phase of seeding, is showing steady growth in the third phase. Dataxis estimates that the sale of made-in-India STBs will witness growth up to 15% in the fourth phase of digitization.

“Local STB manufacturing in India has increased almost fourfold in the third quarter of 2015, and this is in line with our expectations. As the deadline for the third phase digitization nears, there is high demand for STBs from the MSOs and most of the independent and small size operators are coming forward to partner with indigenous brands,” says Sreeja VN, Media Analyst at Dataxis.

The government was also proactive during the period by promoting the make in India campaign in the sector. The decisions of Airtel Digital TV, Dish DTH and Videocon D2H, the three major DTH players, to opt for indigenous brands have also boosted the Indian STB industry.

Another notable trend, according to the Dataxis Research, is the increase in demand for High-Definition and Ultra HD STBs in the region. Dataxis’s analysis of STB shipment for the Q2 2015 and Q3 2015, depicts steady growth in the volume of HD STBs shipped to India. The rise in the number of HD and UHD STBs has also contributed to a rise in the average selling price of STBs to the country.